This is perhaps a confession of something too close to addiction to be proudly proclaimed – but I daresay many readers of this website might have minor confessions of a related type. Anyway, I find it a trifle odd that I, who snootily tend to dismiss some table wines as unacceptably alcoholic at 15% or even less (that hot finish!), should (also) be so much in love with strong drink. 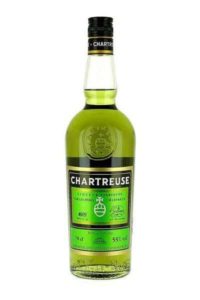 Look around here and the evidence isn’t obvious – no cupboardfuls of spirits or fortified wines. Just a nearly empty bottle of Gonzalez Byass Alfonso oloroso sherry (ABV: 18%), and a nearly full one of green Chartreuse (ABV: 55%!), both of which were a little fuller at the start of my evening – but their presence, especially simultaneously, is unusual in my house, and really what prompted this line of public musing.

In fact, it is the very absence of much evidence that is a sign to be read. If I had a permanent supply of strong stuff, I would drink much too much of it, so I don’t, as I wish to keep within what I choose to consider a reasonable alcoholic intake (though my doctor thinks it pretty outrageous). Brandy, for example. I really love good brandy, and local brandy is excellent value, at all levels, especially compared with pricey wine. I occasionally buy a bottle as a treat (the biggest treat of all being Oude Meester Souverein 18 Year Old), but it lasts a ridiculously short time. Sherry I do tend to have in stock and to drink occasionally, but fino is less alcoholic than some blockbuster red wines, and other styles seldom go higher than 20% ABV.

Sherry and brandy are dry (brandy, including cognac, a little less so than one would imagine), while most of the fortified wines I like are to some degree sweet, and I admit that some of the pleasure is not just the alcohol. It’s also sugar. Port, of course, both ruby and tawny styles, and also madeira (all things being possible, I’d probably choose to be cheerfully sipping a Bual or a Malmsey as I shuffle away from all good things for ever).

And if there’s cream as well as sweetness, then I can indulge joyously in those most vulgar of alcoholic pleasures, alongside the sippers of Dom Pedros and Irish coffees in steakhouses, and the millions around the world who help keep Distell going by drinking Amarula Cream. Cream liqueur is actually probably the first alcoholic drink I can recall enjoying. When I was a small boy, my mother would take me and my little sister to spend an evening playing Cluedo with a delightful elderly neighbour. Mrs Hayott would always produce a tiny glass of Tia Maria as part of the pleasure of sorting out who killed whom, with what, in what room on the gameboard.

More recently (but a good few years back), I had been given a bottle of Amarula Cream and was thoroughly enjoying refilling my glass when I realised that the bottle was half-empty and I wasn’t ready to stop. So I poured the remainder down the lavatory as the only solution to my lack of mature self-control. When I told friend and colleague Cathy van Zyl (not yet an MW) about this, she shuddered and was incredulous, and said something to the effect of “I couldn’t drink that stuff even if it was poured over Brad Pitt!” (too much of a good thing, surely).

As to the Chartreuse I mentioned earlier, this is my latest love. The bottle, as well as the taste for its contents, was given me by Marc Kent, the genius of Boekenhoutskloof, who has long enjoyed this remarkable liqueuer – made by French Carthusian monks since 1737. Alcohol plus some 130 herbs, plants and flowers; wonderful stuff, intensely sweet and hugely powerful, all in brilliant balance.

I mustn’t trivialise alcohol. I desperately pity those who are so deeply committed to strong drink that it controls and limits and too much distorts and damages them. I am enthralled by alcohol and its effects when it’s marvellously allied to delights of aroma, flavour, texture – but not uncontrolledly so. As I suggested, my doctor thinks I indulge too much, but I’m hoping not. Nothing succeeds like excess, as dear Oscar said. The brain cells are going, of course (and I must check up on the liver), but I’m of the age when mental loss becomes sadly obvious anyway. Sensual pleasure persists thus far, however, and I owe much happiness to alcohol.