Tim James: The story of syrah in the Cape 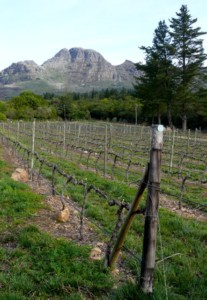 Syrah on Haskell Vineyards in Stellenbosch.

The history of wine-grape varieties in South Africa remains to be properly researched. It’s a task which will not be made easier by most pre-20th century viticultural notes, which reveal a sometimes bewildering ignorance. Take, for one example, what William Bird wrote in his The State of the Cape of Good Hope in 1822 (the book that famously reveals that greengrape – which we now know to be semillon – occupied about 93% of the Cape’s vineyards). Bird describes pontac as “the same as the cote-rotie of the Rhone, the pontac of Guienne . . . and the port grape of the Douro”. How could Bird have imagined pontac being all those at the same time? Unless, possibly, he was just adding up the various European identifications that he’d been given by local farmers.

Particularly interesting to me in that little list is the reference to “the cote-rotie of the Rhone” (his spellings), because Côte-Rôtie’s (black) grape is, of course, syrah. I’ve been doing some preliminary teasing out of the historical presence of syrah/shiraz in the Cape’s vineyards – including borrowing insights and information from Gerald Atkinson, based in Christchurch but the author of deep and valuable research into Australia’s grape history.

There have been unconvincing mutterings that syrah has been present in Cape vineyards for a long time – from a very early stage, Professor Orffer claimed. But I’ve never found any evidence for this in what I’ve read – beyond such ambiguous mentions as Bird’s “cote-rotie of the Rhone”, and the occasional reference to “Persian” varieties. The latter could possibly be linked to the discredited idea that syrah originates around the Persian/Iranian city of Shiraz – a misapprehension shared by Orffer. In an 1824 book entitled History of Ancient and Modern Wines, AL Henderson, writes that “The plants with which the Cape vineyards are stocked, are said [by locals, we presume] to have been brought from Persia and the banks of the Rhine; but, under the new names which have been assigned to them, it is impossible to recognise the species.”

Nearly two centuries later, Dr Atkinson, in a long and densely substantial essay, as yet unpublished, argues that an early 19th century reference to “shiraz” in Australia is in fact to a grape imported from the Cape – one which proved to be white! From the South African point of view, the most interesting thing about this is that it supports the idea that at least some wine-people in the Cape in the early 19th century believed that the great red grape of the Northern Rhône was present in Cape vineyards.

Undoubtedly they believed this in the latter 19th century. But – and here we get bizarre and complicated again – they believed that this Rhône variety was the grape they’d named hermitage, for the most famous of the Northern Rhône winegrowing areas. In fact, hermitage here (unlike in Australia) was the grape we now know to be cinsaut. It’s not clear why cinsaut got called this, but the misleading name is understandable if people thought the grape was shiraz. Emphatically, they did, though this is seldom realised. A book called Viticulture of the Cape Colony, published in London in 1893, states that hermitage “is the Grosse Syrah, originally from the valley of the Rhône, and is of comparatively recent introduction at the Cape”. (It seems that cinsaut came here in the early 1880s, but under what circumstances I don’t know – if it came from Australia, but was not properly identified, that could explain the name.) Similarly, Dr Hahn’s 1888 work entitled “Viticulture in South Africa” insists that hermitage is the “Sirrah bleu of the French”.

It was JP de Waal who discovered the mistake. He was manager of Groot Constantia from 1890 (when it was a state-owned model farm, partly designed to educate winegrowers, but pushed into being more a place where American rootstocks were grown and experimented with, as part of dealing with the scourge of phylloxera). Cape viticulture and wine-making owes greatly to de Waal in many ways – beyond, for example, his being the discoverer that “greengrape” was semillon. He realised this in the vineyards of Bordeaux, while he was on a learning tour of some notable winegrowing areas of the world around the turn of the century – incidentally, how impressive that he realised he could learn from the sniffed-at New World as well as the much-venerated Old.

It was an immense loss to us that de Waal was killed in a tramcar accident in San Francisco in 1902, while continuing his tour. But on an earlier stage, in Australia, he had realised that the Cape’s hermitage was not in fact syrah, but cinsaut, or oeillade as it was known in Australia. (Prof. Perold later claimed to be the first to have proved the identity, but whether or not Perold realised that de Waal had noted it before, I don’t know.) De Waal also recognised how greatly superior was syrah to cinsaut – despite the accolades that cinsaut had received in the Cape from the likes of Dr Hahn. De Waal recommended to the Cape government’s Department of Agriculture that it should import Australian shiraz vine material. To its credit, the reaction was immediate, and cuttings were brought into the Cape from South Australia early in the 20th century.

To my knowledge, this was the first time syrah had, as it were, set foot here. And how sad that JP de Waal wasn’t here to help with the early stages of its so-successful acclimatisation.