The first Cape winery to offer a wine made solely from cabernet franc was Landskroon, it seems, with a 1983. The grape had been grown in a small way through much of the 20th century and became much more important from the 1980s, with the rise of the Bordeaux-style red blend where it is a widely used component of greater or lesser significance. A few other producers joined Landskroon with varietal versions, but even by the end of the century there were fewer than ten made. Expansion since then has been pretty spectacular, and the current Platter’s Guide lists something over 70 cab franc wines, reflecting the grape’s success in a range of conditions. In terms of hectares planted, the variety is still under one percent of the total, but this is double what it was at the turn of the century.

In France, there’s little Bordeaux made solely from cab franc (it contributes about 50% to famous Château Cheval Blanc), where, as in South Africa, it’s overshadowed by its progeny, cabernet sauvignon (sauvignon blanc is the other parent). But in parts of the Loire Valley it’s a different story, and in that cooler zone it tends to make a relatively light, earlier-maturing, more modestly oaked, fresher varietal wine than red Bordeaux – a style increasingly appreciated as the wine-drinking world thinks again about heavier, grander styles. 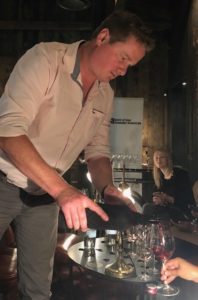 That turn is happening in South Africa too, including with cab franc, and the shift was the focus of a tasting organised in Cape Town by sommelier and general wine-man Higgo Jacobs for SASA, the Somelliers Association of South Africa – sommeliers tend to love the lighter, fresher style of reds, for their great compatibility with food. Higgo worked with the notably well-informed Lukas van Loggerenberg in compiling the tasting – Lukas is the Cape’s great champion of what we could call Loire-style cab francs, and his Breton (named for a Loire synonym for the grape) has received much acclaim in the few years that it’s been made.

At the tasting, held at the Test Kitchen, we blind-tasted four flights of three wines, one in each flight being a foreigner. The first, Domaine de la Semellerie 2016 from Chinon on the Loire set the tone: a fairly simple, but beguiling wine, with red, raspberry-toned fruit, a leafy, herbal element – common in cab franc and part of its freshness – and a modest but informing tannic structure. It was not hard, in fact, to pick out the two locals in this flight – a little more extracted and ripely sweet-fruited: De Kleine Wijn Koop Knapse Kerel 2016 (herbal & floral notes predominating and quite fresh), and Waterkloof Circumstance Cabernet Franc 2015 (bigger, very grippy, darker cherry fruit, some meatiness).

The Van Loggerenberg Breton was in the next flight, following a very good Loire: Domaine Des Roches Neuves Saumur Champigny La Marginale 2013. Incidentally, this wine confirmed a point that Higgo had made – that Loire wines are not by any means always light and modest; many are getting riper and more powerful. What they do have to offer generally, however, is an acidity that complements riper fruit and allows the wine to retain freshness and elegance. Breton 2017 also fitted well into this pattern, however, more than any other local cab franc, being floral, a touch leafy, and fresh, refined and light – just a little sweetness hinting at its Stellenbosch origins. It deserves time in bottle. Hannay Cabernet Franc 2016, from Elgin, was appealing but more awkward, bigger, bolder and more extracted, with a little new oak showing.

It was starting to emerge more clearly what we should be looking for in this lighter style of cab franc: as Lukas suggested, a balance of the herbal, pyrazene note with ripeness of mostly red fruit. A purity of fruit, of course, unmuddied by excessive oak; finesse, definition and texture. These are the qualities that endear this style to sommeliers, as it does go refreshingly well with a range of foods.

The first of the two locals in the next flight was from the producer probably most associated with the variety in the Cape, Raats. The Dolomite 2016 was very fine, arguably more Bordeaux-like in structure, with plenty of tannin and power. The same applies to Eikendal’s Infused by Earth 2017 – also very youthful (some toasty oak evident), needing time for the tannins to integrate.

And then a few more yet-to-be-released Cape wines: Hermanuspietersfontein Swartskaap 2016: rich and fruity, deep, dry and serious, but fresh and pure. Gabriëlskloof Landscape Series Cab Franc 2017 is, to my palate, the best of the three that Peter-Allan Finlayson has bottled; it’s classically leafy (despite its ripeness and 14.2% alcohol), with a velvet, finely textured softness over a firm structure.

The tasting finished with a Chilean wine that came as a bit of a surprise even to Higgo, to whom it had been warmly recommended: Garage Wine Co Pirque Vineyard Cabernet Franc 2015. Very plush, fruity and showy, though well structured; about as far as one could get from the unpretentious charm of the Chinon, the first wine of the tasting. In that sense it served to remind us again that it’s not easy or even desirable to make generalisations about cab franc: it’s a grape variety and not a brand. The great thing in South Africa now is that with the Van Loggerenberg Breton we’ve got a benchmark of a style that hadn’t been seen and tasted here. Already it seems to be having an effect, encouraging more restraint and lightness in other cab francs. As for terroir – well, we must watch and taste and see where cab franc will do well, do best. I’ll venture just one guess: it won’t be the Swartland.