A poll of 27 selected wine professionals has put Sadie Family Wines way ahead as South Africa’s top winery. The last time a similar poll was taken, in 2016, Sadie was just beaten into second place by Mullineux, which reversed their positions in the 2014 vote. This time Mullineux was down to fourth place, behind Kanonkop and Alheit and ahead of Boekenhoutskloof, which was some way behind. 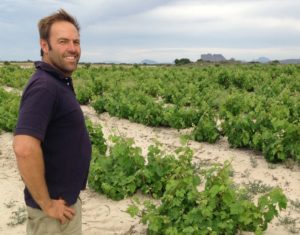 Eben Sadie of Sadie Family Wines in the Skerpioen vineyard.

Voters were asked to name their top five wineries and to rank them. With five points given to their No 1 choice, down to one point for No 5, the results were as follows:

[Please note: When this article was originally published, Alheit Vineyards and Kanonkop got transposed by accident. The error is regretted.]

The poll has been conducted eight times since 2001 (with the largest gap between 2006 and 2010), when it appeared in the print Grape magazine. I have actually always looked for a Top 20, as I did in this latest one – the complete list will be announced shortly. Note, though, that only the leading five are ranked by the voters (a refinement brought in last time); after that, it is simply a question of which wineries get the most votes.

The panel of independent judges has changed substantially, of course, since 2001 and has grown, reflecting changes in the wine world here – with sommeliers joining the journalists, critics and retailers of the first one. Significantly, a number of foreigners have also been invited to vote in recent years – back in 2001 there was no-one outside South Africa with any breadth and depth of experience of Cape wine. The composition of the panel obviously affects the results – particularly where the scoring is as close as it is here between Kanonkop and Alheit. No claim is made for this result being in any way definitive, but the panel is a representative group of people who have a good overview of South African wine (something that is increasingly difficult to achieve) and I’m confident that the result is significant and plausible.

Looking back at that first poll in 2001 is a glimpse into a rather foreign wine country. The Top 5 back then were Kanonkop, Vergelegen, Veenwouden, Neil Ellis and Rustenberg – most of which have fallen off the Top 20 list entirely (and I don’t know if Veenwouden is even a producer now), while two of the current Top 5 didn’t even exist then; Sadie did, just, but hadn’t released any wines yet. Kanonkop is the great survivor, of course, showing great consistency – re-entering the Top 5 in second place in 2010 along with Sadie, where it’s been firmly lodged since then. This is Kanonkop’s best performance, though, since that year.

This year the only other winery vaguely seriously contending with Boekenhoutskloof for the last Top 5 place was Newton-Johnson, with 12 points. A total of 29 wineries did, in fact, get at least one vote, but of the other also-rans only Raats and David & Nadia had votes from at least three of the pollsters. However, as the complete Top 20 list shows, there are some other newish wineries gaining a good deal of prestige as the Cape wine revolution continues its progress – and a few of them are likely to  be knocking at the door of this Top 5 super-elite.

The full Top 20 list will be published on Monday here on winemag.