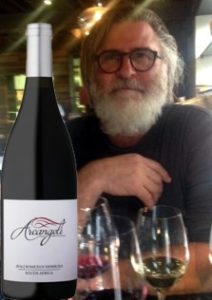 You couldn’t call Krige Visser a Young Gun – not with that splendid full grey beard (acquired fairly recently – since I last met him, at least). But in spirit? Ah, yes. A Middle-Aged Gun, then. I had a pizza with him last week at Burrata in Cape Town; that is, I had a pizza but his gluten intolerance wouldn’t let him do more than look wistfully at mine, while he had a risotto. But first we tasted his maiden release of wines from Arcangeli Vineyards in Bot River.

This is, in fact, Krige’s first serious exercise in winemaking (perhaps that does make him a sort of Young Gun after all), though he’s been a notably passionate, perhaps maverick player in the industry for a few decades now, mostly on the marketing and management side of things (La Vierge, Meerhof, briefly Holden Manz). He also owns the Mount Abora label, along with fellow eccentric, Hermit on the Hill Pieter de Waal, and indisputably Young Gunnish winemaker Johan “Stompie” Meyer. But Arcangeli is Krige’s first throughgoing venture into winemaking, and I would say that he’s ventured very successfully.

Arcangeli Vineyards is the property in Bot River that used to be Feiteras Vineyards, until it was bought a few years back by Sandro Arcangeli, as Italian as his name suggests, and in the construction business (which was no doubt a useful background for rapidly putting up guest cottages and extending the cellar). There’s only a bit more than four hectares of vineyard, which I believe is going organic, so Krige has the pleasure of roving the Western Cape in search of suitable fruit. The wines, too, are in the natural, organic spirit, which is precisely suited to the Visser spirit.

All are from 2016, all fermented spontaneously, all made in a rigorously hands-off way, and matured in older barrels. There are two whites. The Sémillon (they use the proper accent on the name) is a mix of Hemel-en-Aarde and Bot River grapes. It’s clearly oxidatively made, stressing texture and depth of flavour, including a winning earthy note, rather than simple fruitiness. It is deliciously drinkable. The same basic principles apply to the Feiteras Verdelho (from the home vineyards whose verdelho had becoming well known under the previous Portuguese owners). A lovely, integrated ripe acidity and a sense of sweet, appley fruit.

There’s a light-coloured nebbiolo, Romulus (celebrating Sandro Arcangeli’s home town), with grapes from the Dagbreek farm in the Breede River Valley which makes a wine from the vineyard and also supplies fruit to DuToitskloof. The classic floral and tarry notes are there, with good old Italian sour cherry. It’s an intriguing wine, which changes in the glass in its youth; it tends now to an elegant, dry austerity (rather satisfying, and good with pizza!), and I think it has potential. I, anyway, would leave it a good few years.

The Syrah-Mourvèdre is off home vineyards, with good bush-scrubby, dark-fruited aromas, with a little bright perfume. There’s succulent, full fruit along with a rather sombre note and firm tannic structure. Brooding then, while contemplating its future. The other home-farm red is, it must be said, predictably the least involving of the line-up: a Merlot-Petit Verdot-Cabernet Sauvignon blend. It’s an honest expression of the Bordeaux style, with cigarbox and berry notes, and quite a bit of structure.

But I think more of the other wines, and welcome Arcangeli as a great addition to the developing excitement of the Bot River area – a ward that is doubtless going to be better and better known to serious winelovers over the next years.

In case I’ve been altogether too positive about Arcangeli, however, let me add a tiny complaint, which is that the packaging doesn’t quite meet the quality or the interest-factor of the wines. Gosh, if your brand is connected to some of the most exalted creatures in the Christian celestial hierarchy (are archangels creatures?), surely you can come up with something better than pedestrian calligraphy on an expanse of ordinary white paper for your label? Golden trumpets or glorious technicolour wings, please, at least, even if you don’t want to go in the funky direction that might better suit the spirit of Krige’s winemaking.