Tim James: The year in review

The year seems to approach its weary end unusually quickly in Cape Town. Maybe it’s the bloody tourists. They’re already blocking the view of mountain and sea, drinking and flushing away all our water, and helping to clog up the roads mid-day, joined in the latter pursuit by the locals who usually swell the now comparatively serene rush hours. My Uber driver on Saturday night (I dinner-bound) said that the last two weeks have been much busier for him and his colleagues; my second Uber driver (I home-bound, later and drunker) cost about 60% more than the first, for the return journey – owing to, as Uber sweetly informed me, “increased demand”. Increased demand for profit in the season of good will, I grumpily inferred.

Anyway, this feeling of winding down has prompted some of those year-valedictory thoughts about the various “wine things of 2017” – best, worst, etc. Rather dilatory, unsystematic thoughts in my case – perhaps I’m already too affected by Cape Town doziness. Best? What’s best? 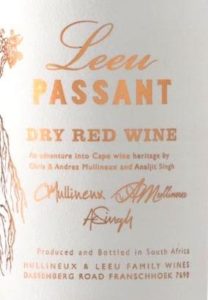 Ok, let me not be as disingenuous as Uber. Best maiden release of 2017 is easy: Leeu Passant, with a great red blend, and two chardonnays to swell the wonderfully well-jostled elite of Cape chards. Another contender, and a rather more affordable one, was Carinus, with further intimations of how much quality is being hidden by the big grape-farmers. I bumped into Danie Carinus at the Platter’s Guide launch, where he collected his five-star certificate, and he assured me that more wines under his and Hugo’s label are lining up. Good.

Talking of Platter and of chards, my most fascinating Platter tasting this year (out of the 100-odd producers I tasted, from tiny to large, and out of 1917 in general, I suppose) was of Richard Kershaw’s wide and splendid range of terroir- and clone-driven chardonnays and syrahs  (mostly 2016s and 2015s respectively, nearly all from Elgin). A rare and remarkable survey. Another, rather older, producer I particularly appreciated as a whole this year was Rustenberg, which seems to have returned, through a half-decade under the winemaking leadership of Murray Barlow, to a coherent aesthetic at a consistently high level of achievement. Returned, that is, to a place where it surely belongs, amongst the grandest old Cape estates.

How about, then, an award (notional!) for this year’s most improved winery? After all, the most one can really ask a producer to do is to do it all better. Rustenberg has been doing so gradually for about five years; so too has AA Badenhorst, whose reds, I recently suggested elsewhere, have improved greatly, to a position of real excellence alongside the whites. But I think I’ll give my award to a less illuminated Swartland producer – Intellego. Winegrower Jurgen Gouws started his label while he was assisting Craig Hawkins at Lammershoek, before they both left in a shake-up a few years back. It was a good move for Jurgen , as evidenced by his wines, chenin- and syrah-based. Always attractive, unpretentious, lightish, with integrity, and immensely drinkable, they’ve gained in detail, expressiveness and depth. And are delightfully cheaper than the competition.

A place among my greatest wine experiences of the year must go to the rare chance to sample an old Constantia – this one from 1875 (probably), two bottles of which were donated by a Swedish collector for a tasting at Klein Constantia. No pretending or massaging was necessary to accept and enjoy the lively, still-fresh loveliness and balance of this 140-year-old.

And for a total great wine experience, a visit to the Douro was hard to beat. The image that comes to mind now is of a fine room in the Grahams lodge in Vila Nova de Gaia, with a view across the other port lodges down to the banks of the Duoro, with a spread of ports on the table before me: most notably the range of old Tawny Ports, moving by decade from the 10 Year Old to the magisterial 50 Year Old and, my favourite of them all, the 1972 Single Harvest.

Back home, and my best South African wine drunk rather than tasted in 2017? Less sure about that, given the problematical nature of “best” unless carefully defined, but what I insistently recall is the 2010 Sadie Mrs Kirsten, soaring blissfully into complex maturity. Lucky old wine, I thought ruefully as I wrote that. Then: lucky old me in my decline to have had the privilege of catching it in my glass.