While much of the South African wine industry was whingeing and weeping on the international and local stages about its problems and opportunistically assigning too many of them to lockdown (see Edo Heyns’s very relevant comments), and incoherently trying to cope without the representative leadership that is so much needed (as Michael Fridjhon argues)  – all the time, a few groupings, as well as numerous wineries, were proceeding with dynamic strategies that bring honor to South African wine on the basis of quality and interest rather than on pathetic hard-done-by-ness.

Arguably foremost amongst such organisations is the Old Vines Project – whose basic story we should all know by now, precisely because it’s a good story and a valid one, well told. And important. Jancis Robinson commented to me that “the OVP and its work has cast a glow on South African wine in general”. The project was built on the foundation of the imaginative and dedicated work of Rosa Kruger over the past two decades (with the financial support of Anthonij Rupert wines and Johann Rupert, and let’s not forget the exemplary international success of Eben Sadie’s Old Vine Series from 2009 onwards, and other great wines made from old vines), and more latterly developed though the energy and skillful work of, above all, OVP project manager André Morgenthal.

What is so good about the OVP is that it is directed not only at selling wines bearing the official sticker (making it the only organisation in the world that guarantees the age of the vineyard represented in the bottle), but at the very fundamentals of fine wine production in the country – while also cooperating in international research into old vines. The OVP brings together farmers with good quality vines over 35 years old (most of them having fed vast co-op tanks at minuscule profit) and winemakers that are prepared to pay a decent rate. Wonderfully, it now also concerns itself with the viticultural challenge of caring for and even planting the old vines of the future: “plant to grow old” was, I think, André’s formulation.

So much for the background. I caught up recently with André, spurred on by reading about his and Rosa’s participation, in March, in the first part of an intermittently continuing online Old Vines Conference, with other participants from Spain, Lebanon, Italy, Portugal, and the USA, speaking to a network of over 300 people from 25 countries. (See more about the Conference here, and the presentations on YouTube.) I don’t easily get sentimental about such things, but I did feel a rush of pride in the pair of them. As the Conference website says, “their actions have led to renewed respect for South Africa’s wine heritage and fine wine potential”.

And André is justly proud of the OVP’s role in galvanising and influencing the rest of the world’s interest in old vines; it has become, he says, “a real presence in the world”. It wasn’t necessarily the first such organisation, and shared in an international mood – Australia’s Barossa Old Vine Charter emerged in 2009 and California’s Historic Vineyard Society in 2011 – but, André insists, it was fundamental to creating the category. And it helped entrench a general international agreement that 30-40 years is the age that it generally takes for vines to become fully in balance. (For more of the arguments about the virtues of old vines see the OVP and Old Vines Conference websites – there’s much that is pretty convincing.)

International involvement is only significant if it is based on a genuinely successful movement at home. Try this: the area of old vines on the organisation’s books has grown from nearly 3000 hectares in 2016 to some 3700 in 2020. As for members of the OVP – pre-lockdown there were 70, and André and Rosa were gloomily expecting to lose some. But now there are 100, with some highly important producers amongst the more recent joiners, suggesting that there is value even for the likes of AA Badenhorst. (Sadie Family Wines has long been a member – and perhaps one day will use the seals on its bottles, even if that would be of more service to the OVP than vice versa!) And, says André, others are looking forward to their vineyard becoming eligible. He quotes consultant Nadia Hefer: “Mense sit op ‘n klip en wag vir die wingerd om oud te word” (People sit on a stone and wait for the vineyard to get old). Crucially, it seems to me, there are six co-ops that have joined the OVP – their buy-in is particularly important, given that around 85% of old vines are owned by co-op members. 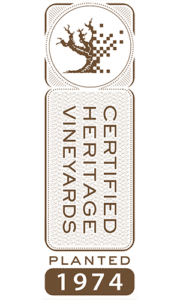 So. Look out for those Certified Heritage Vines seals on bottles – I believe that many local wine retailers now have a special section for them, which makes it easier. Whether or not you fully buy into the idea that old vineyards necessarily produce the best wines (but look at all the arguments and the ancillary advantages before you decide against), you’d be participating in an important – and feel-good – story about Cape wine. And if you’re in the mood for feeling proud of a small, over-achieving South African wine institution, you could do worse than choose the Old Vines Project.