Tim James: What Have the Supermarkets to offer Serious Wine Lovers?

The top end of Cape wine – and the upper-middle range – gets increasingly costly (no judgement here – just saying!). The bottom shelf of bottled stuff is, on the whole, intensively grown and industrially made plonk (a bit of rough judgement there, admittedly) and cheap enough by international standards – though I was fascinated to see even cheaper bottles on Portuguese supermarket shelves, but the wine they contained was ghastly, judging by the few I gingerly sampled.

But what is there of interest for the sort of people that regularly read this website, for example, but can’t afford to spend R250 for the daily bottle, or even R100? People who are engaged with fine wine, interested in artisanal wine, who want something more interesting, something “better” than the bland, “commercial” stuff that is suspected to dominate the categories of, say, under R70 for whites, under R100 for reds? Being such a person myself, I thought it would be a good idea to start investigating. My plan is to go to a supermarket occasionally, find three or four related bottles in the appropriate category, give them a test run and report back. (With any luck, readers will chip in and offer amendments and other suggestions too.) 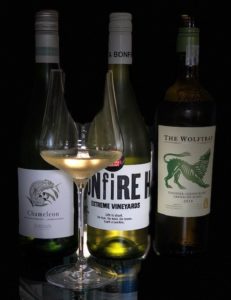 To ease into the process, I popped into my local Checkers’ wine section (have I ever done that before? I don’t think so). The selection wasn’t expansive or adventurous or inspiring I thought, but there were many whites under R70, even quite a bit under. Ignoring the likes of Graca, I settled for three white blends: two at R70, one at R60. All of them have connections with much grander and more expensive wines and all declare an origin more delimited than Coastal Region or Western Cape – which seems to me a good, admittedly safe start. Oh, and all are under screwcap, which I only registereed when I got them home.

To start with the label that I’ve before thought to be exceptionally good value (though it’s gone up by a modest leap since I last looked): Wolftrap White 2018, (R60 – I refuse to acknowledge R59.99 as meaningful), “matured and bottled by Boekenhoutskloof”. From the Swartland, and a typical “Swartland white blend”, based on viognier and chenin blanc, with grenache blanc. For some reason Checkers offers it under a sign saying “semi sweet”, which it is not, though it has succulent fruitiness and rich softness of texture, braced by a firm, slightly aggressive acidity. There’s plenty of aroma, plenty of flavour which is easy to accept as Swartlandish. It’s OK, it’s very nice, but not likely to become the recourse of a fine-wine addict. I was a touch disappointed – I remembered it as being less superficial and ingratiating.

With two years longer in bottle, the 2016 chenin, grenache, roussanne from Bonfire Hill Extreme Vineyards (from Bruce Jack Wines) had an advantage, if you enjoy a bit of development. The website only talks about the 2018 – two vintages on! – so it’s not clear why Checkers is still offering the 2016. Perhaps it just doesn’t sell well. In terms of origin and general style it’s comparable to the Wolftrap, coming from Swartland chenin for the larger part, with grenache blanc and roussanne. It costs R10 more, and is worth every extra cent. It’s nicely peachy, but less overtly fruity-simple, with more interest, even complexity. It’s fresher, with the acidity better integrated. Altogether a more sophisticated drink and I’d happily recommend it to serious wine-lovers wanting to trade down a bit. Maybe it’s those extra years in bottle that does it (so take note of the vintage) – but I don’t see the Woftrap ever getting to this point, and I reckon the Bonfire Hill will cruise for a little longer.

A shift in style and origin to my third supermarket wine: the well-known Chameleon Sauvignon-blanc Chardonnay, made by Jordan from Stellenbosch grapes. Two-thirds sauvignon, 21% chardonnay and 12% chenin; this bottle from 2017, selling at the same price as the Bonfire Hill, R70. One can find the contributions from the different grapes if one looks, but the blend is brilliantly successful as such. It’s a very attractive wine, alert and lively, friendly and yet without Wolftrap’s sense of dumbing down. I suspect that I’m more likely to finish the Bonfire Hill first, but that is a matter of personal preference rather than quality. The Chameleon is also unreservedly a good wine.

Good wine? If I were scoring I’d be close to 90 points for the two older wines, 5 points less for Wolftrap (which goes with the price, of course). Good value, certainly, these days. So I’m relieved and pleased, and looking forward to some more supermarket exploration – though I’ll be getting nervous when I move to reds. South Africa makes such great white wines: we locals are lucky, and really don’t need to spend a fortune to get grown-up pleasure from the best on offer at lower levels.

Chef Marthinus Ferreira, of dw eleven - 13 in Johannesburg, has been selected as head chef of The Jordan Restaurant in Stellenbosch from mid-April 2022. The signature restaurant will trade...

Marc Kent, Boekenhoutskloof cellarmaster for over 25 years and its effective director for many of those (and a major shareholder in the brand), no longer concerns himself with “dragging pipes...