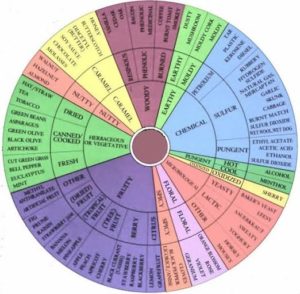 Some years ago I had an enjoyable email correspondence with a Californian named Ian Joseph who objected (unfairly, of course!) to a tasting note of mine as “bulls**t”. We had a good-humoured interchange (see here ), which he trumpingly concluded with an enviable wine description from Russell Crowe in A Good Year: “Bouquet of a wet dog, hits the palate like a razor blade, and a finish that hints of offal.”

I’ve been somewhat exhaustedly thinking a bit about wine notes, firstly as I’ve generated nearly 400 of them for Platter 2016 in the past months and also proofread the other thousands. Also, there’s been some blogosphere comment about wine notes in general – which nicely complements the little local flurries about scoring. (My rational conclusion is that both scores and descriptions are largely useless – but we need them in default of anything better.)

There’s an interesting piece in a recent New Yorker by Bianca Bosca, entitled “Is there a better way to talk about wine?” She opens her article (which you can read here) by pointing out that in 1992 the American wine critic James Suckling described the taste of Château Haut Brion 1989 in a single phrase, while, in 2009, for the same wine, “his description of the wine’s flavor carried on for seven sentences, evoking cigarettes, pastries, and saunas in his promise of ‘perfumed aromas of subtle milk chocolate, cedar, and sweet tobacco’”.

OK, this Bordeaux must have increased in complexity in 17 years but, as Ms Bosca suggests, tasting notes have also evolved – in the direction of extravagance. It’s mostly an American thing, this listing of “organoleptic” characters, piling them up, the more the better, and the more abstruse the flavours and aromas invoked the better too. And, of course, as the world becomes American, so too have all our tasting notes. Somehow, listing all these aromas and tastes (defying the fact that such experiences and associations are generally idiosyncratic) has become a substitute for ,,,, for what? I’m not quite sure, but something that conveys an idea of the style of the wine: heaviness, lightness, ripeness, acidity, tannin presence, austerity, generosity, etc.

In South Africa, we’re still fairly restrained, happily. Platter notes, like Tweets, are forcibly restricted in length, which helps, and they’re seldom too fanciful. Perhaps the biggest problem there is the overuse and, arguably, misapplication of words like “finesse” and “elegance”.

And then, of course, there are the fashionable words. Suddenly, for example, any number of wines are described as “saline” – which sounds a touch more likely than “salty”, perhaps, but I’m still doubtful. A decade back, it was surely only the occasional manzanilla that was credited with a salty tang. Are we looking for the quality and therefore finding it? Perhaps the most notoriously imprecise and widely used adjective these days is “mineral” – which has about as many shades of meaning as there are people deploying it. And yet “mineral” does convey something real to me. As do many tasting notes – the more allusive and poetic, I sometimes find, the better. Vast tracts have been written about the problem of how to communicate about wine, and about how inadequately it’s done, on the whole, and there’ll undoubtedly be more.

Meanwhile, it’s fine when nerds are writing for nerds rather than herds. But how many are meanwhile alienated? Maybe that’s why this American style of dumbed-down lists of flavours has emerged. Anyone can relate to the concept of a wine tasting of freshly roasted mesquite or boysenberry or pan-fried Asian spices (or most likely all three) even if they’re unfamilar with the flavours, and the longer the list the better the chance of – “ohmigod, yes, I can taste that one, just like James Suckling”.