Tim James: Where to for the SA wine industry?

In the context of so much excitement about South African wine – here on Winemag as much as anywhere – it’s sobering, and even surprising for someone like me, with a focus on the top end, to be reminded of the depth of the problems in the wider industry. Or the other wine industry, if one is tempted to consider that South Africa, like many countries, effectively has two wine industries (fine and bulk), rather than one. 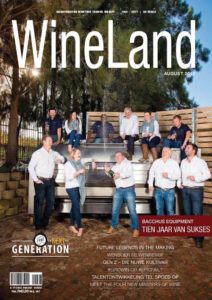 So I was a little jolted to read Wanda Augustyn’s editorial in the August edition of WineLand. She mentioned not only that the wine industry is “fragile”, but also that it’s on a “downhill course”. I wondered what exactly she was thinking of (undoubtedly not just the increasingly disastrous drought.). Of course, I could have just asked her, but decided to try to formulate some of the problems myself, with the aid of some of the statistics so invaluably gathered by Sawis (South African Wine Industry Information and Systems). The latest annual set of some of these statistics was published a few months ago – if you’re at all a statistics junkie, or just want to find out some information about trends in the industry, I recommend you download the booklet from the Sawis website.

WineLand is, essentially, the vehicle for VinPro, the body that speaks for the multitude of grape-farmers, and VinPro is seriously concerned about the dangerous unprofitability of much grape-farming. So Wanda’s view of the industry being on a downhill trajectory is likely to be part of that.

The figures bear it out. Please note that I have trouble understanding complex economic issues, and anyway there is not the space here to even attempt a full appreciation of the grapefarmers’ problems and the manifold consequences. But just in case you too have been tempted to think that the brilliant international successes of Sadie, Mullineux et al can have very much meaning to the bottom line of the South African wine industry as a whole, look at the numbers and think again. And remember the minuscule proportion represented by all the wines scoring 90+ points or 5 stars in the significant local and international forums.

And remember, as I’ve pointed out before, that no wine-producing country in the world has such a large proportion – about 85% – of its wine produced by big merchants and what are essentially commercialised co-operatives – “producer cellars” in local jargon. Frankly, I have no doubt that this structural anomaly is intimately connected with the problems.

Table 7.1 in the latest Sawis annual booklet (No 41) reports on “Producers’ sales and income” for the years 2005 to 2016. It shows that average income for producers (based on rands per ton for grapes) has risen by about 58% over that period. Even with fuzzy arithmetical skills you can sense that that rise is well below inflation. Production costs – closer to inflation – have risen by 115%. (And look at the cost of packaging – not directly anything to do with grapefarmers – and you’ll see that that has risen by 235%! Reminds one of the old 20th century joke that the South African wine industry is best understood as an adjunct of the packaging industry…).

So what are most grape-farmers doing? When grape prices are low, they have the choice of increasing yields to maintain their income, or abandoning their vineyards or at least neglecting the expensive task of maintaining and eventually replacing them. All of these options are undoubtedly being taken. Amongst the co-ops, the drive is to the lowest-priced, highest-yield bottom.

Sawis figures certainly indicate parts of the second option. Since 2007, more vines have been uprooted than planted (Figure 5.3 in the latest booklet), leading to a decline in the overall size of the South African vineyard. In suitable areas they’ve been replaced with lemons and blueberries, so nothing to worry about there, really. But many areas are not suitable for water-intensive agriculture.

We can be sure that many, many more vineyards that haven’t been uprooted (why bother?) are simply being more-or-less neglected. The source for Chris Alheit’s original Radio Lazarus, for example, was an abandoned vineyard; there are very many more like that. One thing that this example can remind us of is that the tiny elite of South African wine does have a very real connection to the rest. Perhaps it is one industry after all. Name the 20 most exciting wines to have emerged in South Africa in the past 15 years and you’re probably implicitly referring to nearly as many vineyards whose produce previously went into the vast blending tanks of the co-ops.

Does this hint at a possible prosperous, fine-wine future for South African wine? Could it happen? Will WineLand editorials in 10, 20 years be still, or even more urgently, talking about its downhill course? Will we here on Winemag still be waxing excited about what is only a minuscule proportion of Cape wine?