Tim James: Will we ever see a wine from Judge Hlophe?

In my first – and, as it proved, incomplete – survey of the many lawyers involved in Cape wine production, two names I intentionally omitted (saving them for now) were those of the couple who founded Domaine Brahms in Paarl in the late 1990s. Gesie van Deventer is not now a lawyer – she’s still at the “Domaine”, but has of late been too busy as mayor of Drakenstein to make wine, and if she gets to be the mayor of Stellenbosch after August 3, as she and the Democratic Alliance hope, no doubt she’ll be even busier.

As Gesie Lategan, however, she was a Cape High Court advocate, many years back, before her interest in wine took (temporary) full possession of her ambition and interest. Her then husband, Braam Lategan, was also in law, and the better known of the two. Notorious, even, in some circles. He was reckoned as one of the apartheid state’s keenest “hanging judges” – in one two-year purple patch in the mid ‘80s he sent 29 people to the dreadful gallows. I could never bring myself to try their wines – and once remarked a bit luridly in an article that his and his wife’s wines were “a particularly disconcerting shade of red”. 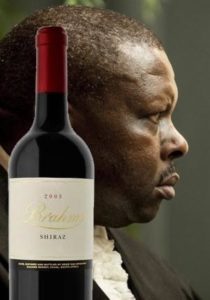 Surprisingly, perhaps, the hanging judge, now retired from the Bench, was on particularly good terms (for a while) with one of the new guard, Cape Judge President John Hlophe. Judge Braam assisted and encouraged Judge John to acquire a small farm next to his own. Ten years ago there was talk of a forthcoming “Hlophe Shiraz”. Sadly it never appeared in South Africa (whether it was made – by Gesie the plan was, I gather – and some exported, is shrouded, as they say, in mystery). But it seems that the Judge President needed permission from the Justice Department to derive income from wine, and this wasn’t forthcoming.

As to the amicable relationship between the two eminent jurists we do know (from a 2011 Mail & Guardian article by Glynnis Underhill) that the friendship didn’t survive all that long. By the time of the article at least, it was over – “terminated”, in the word of Lategan, who had retired from the Bench and got divorced from Gesie (I’m not sure of the order in which the two splits happened) and was living in Gordon’s Bay.

Ms Underhill had been doing some follow-up investigation following a report that the Judge President had been arrested for overloading a bakkie with bricks. The unsympathetic Lategan was quoted as saying he was “tickled blue” (yes, blue), and had heard that Judge Hlophe needed the bricks because he was “building a weekend place for himself on the land he bought next to my old farm”.

Last week I tried to get some up-to-date information via Judge Hlophe’s secretary about any continued involvement with wine, apart from drinking the stuff (he’s apparently well known as a red-wine-lover), but sadly didn’t even get the courtesy of a rebuff. So who knows. Perhaps a Hlophe Shiraz is merely awaiting the judge’s retirement from his juristic triumphs and tribulations, and will eventually augment the long, ever-growing, and mostly honourable, list of lawyer’s wines in the Cape.