I’m starting to think that life is a series of mishaps punctuated by good bottles of wine. It was approximately 01h00 this past Sunday when a green Jeep Wrangler hit various vehicles parked on street outside our house before crashing through our garage door into the back of my Honda CR-V and then fleeing the scene. 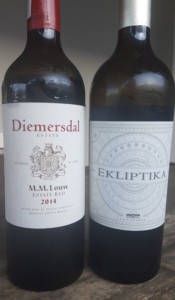 Earlier in the evening, we’d cooked lamb chops on the braai which we paired with the 2014 vintage of both Diemersdal MM Louw 2014 and Longridge Ekliptika 2014. A large part of the motivation for selecting these two wines arose as a consequence of the recent 10 Year Old Wine Report featuring the 2010 vintage and the vague feeling that to wait 10 years to broach modern SA red is, in many instances, to wait too long…

The MM Louw is the designation for Durbanville property Diemersdal’s pinnacle wines, the 2014 red being a blend of 64% Cabernet Sauvignon, 21% Merlot, 5% Cabernet Franc, 5% Malbec and 5% Petit Verdot while the Ekliptika 2014 from Longridge in Stellenbosch is Cab Franc-driven with Cab and Merlot also in the mix, alcohol of the former 14.5% and of the latter 14%.

It is interesting to note that the MM Louw 2014 never fared that well with the Winemag.co.zo panel rating 86 in the Cape Bordeaux-style category tasting of 2016 and again 2017  (the more modest Private Collection 2014 being preferred gaining a rating of 90 in 2016) while the Ekliptika 2014 found favour with a score of 91 in 2017.

Drinking these wines primarily for pleasure now, I’d ultimately be hard pressed to say that there is a very vast difference in basic quality. The issue with the MM Louw is that it is a wine premised on fruit power and the uninitiated are probably going to be more easily impressed as a result whereas the Ekliptika has more restraint about it.

That said, there is a sense that the passage of time has mellowed both of them and removed some of their individual outstanding characteristics that they showed in youth. Are they drinking optimally? I’m sure that they will go for a while yet but I certainly did not feel guilty of committing infanticide.

Moreover, when it comes to professional tasting notes, I’ve long since given up suggesting drinking windows as it is such an inexact science – wines of great reputation sometimes disappoint while the more modest can provide happy surprises when it comes to bottle maturation. Equally, there is one sort of pleasure to be had drinking wine very young and musing what it might become and a different sort drinking it old and imagining how it used to be. My contention is that when to open any particular wine should be entirely at the discretion of the individual.

In any event, lamb prepared over an open fire paired with something made in the Bordeaux idiom is a simple pleasure and these are to be savoured as you simply don’t know when you might find yourself standing in your nightclothes giving a statement to the police.

Misterie is the second vintage of the top-end Merlot from Longridge in Stellenbosch and, once again, it demonstrates how challenging this variety is under local conditions. Matured for 24 months...

The Journal Sauvignon Blanc sits at the top of the range from Durbanville property Diemersdal and is clearly designed to make a statement. If the maiden 2019 (90 points in...

When Maandans 2017 from Longridge in Stellenbosch was released last year, it demonstrated that Pinotage doesn’t always have to trade off fruit power in order to impress but at R1 200...