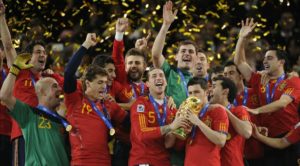 We all know Spain won the World Cup this time around, and Italy won it in Germany four years ago. But who were the runners up? Holland will be remembered as 2010 losers and I can just about recall that Germany and Uruguay were in the play-off for third place this year but I have absolutely no idea who was involved previously.

Competition matters because endeavour needs rewards. When it comes to commerce, it matters because it keeps prices low and choice high. It forces producers to innovate.  Tim James of Grape.co.za is quick to ridicule this year’s Shiraz Challenge saying that “one could construct a more exciting Top Ten list from wines at the bottom end of the results”. Over lunch, he suggested to me that it won’t be long before the much acclaimed (and fourth placed in the year’s competition) Eagles’ Nest stops entering competitions because its reputation is now established. It could equally be pointed out that wines like Boekenhoutskloof, Haskell Pillars, Hartenberg Gravel Hill and even the winning winery Saronsberg’s flagship label were not entered. Indeed. You shy away from competition, you become yesterday’s hero.

Congratulations, Dewaldt Heyns, winner of the 2010 Shiraz Challenge. Enjoy your moment of recognition as a very fine winemaker. Let Mr James enjoy his bottle of Chave Hermitage tonight which bears very little relation to what the rest of us drink on a regular basis.