Why SA wine is starting to attract the big bucks

During my first ever visit to Australia to judge the Victorian Wine Show, one thing that particularly impressed was the organizational complexity of its industry versus ours. The state of Victoria has 23 000ha out of Australia’s total area of 135 000ha under vineyard and approximately 750 wineries. This compares to South Africa’s 95 000ha and 546 wineries in total.

An affluent domestic population also means that wineries aren’t afraid to charge top dollar – if you want to drink the Carrodus Cabernet Sauvignon 2016 from Yarra Yering which all-powerful critic James Halliday rated 99 points, as made by Sarah Crowe, Halliday’s 2017 winemaker of the year, then you must be prepared to pay AU$275 a bottle, the equivalent of just over R2 800. I at least got to taste it and very fine it is, too. 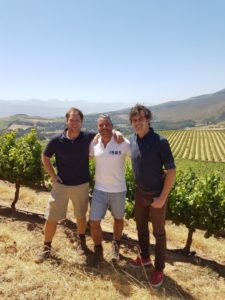 Will South Africa ever get close? Yesterday, I was a guest of AdVini to view two of the French company’s recently acquired Stellenbosch properties, namely L’Avenir and Le Bonheur both, as it so happens, situated on the R44 between Klapmuts and Stellenbosch and the first observation to make is that this is little stretch of road is all of a sudden attracting big bucks with both the venerable but until recently moribund Lievland acquired by MAN Family Wines (the partnership between José Conde of Stark-Condé and the Myburgh brothers of Joostenberg) and Warwick and Uitkyk by US-based Eileses Capital to go with AdVini’s purchases…

Le Bonheur currently has 64ha under vineyard, the intention being to get this up to 85ha in due course. Dirk Coetzee, the well-established L’Avenir winemaker, and William Wilkinson, previously of Wildekrans in Bot River, are over-seeing a project of consolidation and renewal both in the vineyards and the cellar (processing capacity set to be 1000 tons) and the idea is to focus mainly on the long-standing Cape Bordeaux red blend that is Prima, a single-variety Cabernet Sauvignon and a Blanc Fumé. The Weather Blocks Sauvignon Blanc 2018, including grapes from a 1977 vineyard planted to the “weerstasie” clone and featuring some 20% matured in new oak as made by Wilkinson, is most accomplished and hints at a bright future for this property…

Back at L’Avenir, meanwhile, the two key varieties are Chenin Blanc and Pinotage with a  duo of Single Block wines at the pinnacle of the range. Both are very good but production is inevitably small – grapes for the Chenin Blanc comes from a 2ha block planted in 1973 and only 3 000 bottles of the current-release 2017 (R360 a bottle) were made while grapes for the Pinotage come from a 1990 block, the volume of the current-release 2016 (R500 a bottle) slightly higher at 5 000 bottles.

I ask Coetzee what it might take to produce 100 000 bottles of a wine which would consistently rate in the mid-90s on the 100-point scale and his answer is immediate and brief: “Time.” He continues by saying: “Look at Kanonkop. They’ve been making the same wines for decades making improvements little by little.”

The South African fine wine sector has enjoyed a golden period of late and I’m sometimes inclined to think that the quality improvement curve must necessarily flatten out. Perhaps, however, what we are seeing is a realisation by global investors that South African wine is fundamentally undervalued and the resulting forays by the likes of Advini and Eileses Capital will drive even further advances.

Uitkyk in Stellenbosch was first granted to a certain Jan Oberholzer in 1712, later that century becoming the property of self-made immigrant Martin Melck (of Muratie fame) who ceded it...