Why we probably all miscalculate Robert Parker’s influence

Prominent US wine critic Robert Parker rose to fame when he called the 1982 vintage in Bordeaux superb contrary to the opinions of many other critics who felt it was over-ripe and low in acidity. Whether directly due to Parker or not, many producers around the world proceeded to pursue fruit power at all costs during the 1990s and 2000s – reducing yield by green harvesting, picking grapes as late as possible for maximum ripeness and using microoxygenation to soften tannins.

Increasingly, however, we are seeing a reaction to these impactful wines and now light and fresh is championed in many quarters – grapes are being picked much earlier and techniques such as whole-bunch fermentation and carbonic maceration are now very much in vogue with the result that many of the most fashionable wines at the moment have a radically different tannin structure to what Parker might have rewarded in his pomp.

The question is: Are “Parkerised” wines modern because they rely on a very scientific approach in both vineyard and cellar or old-fashioned because they’ve already had their day and the taste-makers have moved on to always craving lightness? 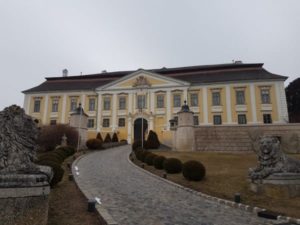 It was on a recent trip to Austria, tasting mostly white wine rather than red, that some sort of answer to the above presented itself to me. Schloss Gobelsburg is a winery in the Kamptal wine growing region in Lower Austria – Cistercian monks have owned extensive plantings in the area since 1171 before acquiring the castle which today houses the winery in 1740. Michael Moosbrugger gave up a career in hospitality to take over management in 1996 and the winery is again firmly established as one of the country’s most outstanding.

The best vineyards that Schloss Gobelsburg has access to for Grüner Veltliner are Ried Grub, Ried Lamm and Ried Renner while those for Riesling are Ried Gaisberg and Ried Heiligenstein and the 2016s that I got to taste of these where immaculately made, displaying particular density of fruit.

The revelation, however, was the Tradition Riesling 2015 where the winemaking technique is informed by the methodologies that applied in the period 1800 to 1850 before the industrial revolution – grapes are mashed, maceration lasts six to 10 hours before fermentation and the wine spends a two-year period in barrel, including racking every three to four months to allow the wine to “breathe” and get it off its lees.

Moosbrugger thinks modern winemaking is too aromatically focused and argues that his more traditional approach goes towards achieving a certain structure in the wine. He likes the idea of “cellarmaster” and reckons that his task is to realise the potential of a wine much as a teacher attempts to do with a pupil. He is therefore compelled to see the wine undergoes certain developments, this in contrast to the thinking that prevails now that great wine is made in the vineyard and not in the cellar, winemakers typically claiming to do as little as possible in the vinification process.

I didn’t necessarily understood everything Moosbrugger put forward, but what was impressive was the historical perspective that obviously informs his work.  He’s not particularly concerned about “natural wine” as a reaction to the supposed influence of Parker but rather sees wine in the context of centuries. Humbling for those of us who inhabit the New World.

One of the worst things about Cape Town is you will almost always know someone wherever you go. This lack of anonymity has people constantly posturing, keenly aware that somebody...

It's the end of the year which brings with it awkward office parties, dysfunctional family holidays and endless predictions of what the next year will hold across all fields of...