It’s the end of the year which brings with it awkward office parties, dysfunctional family holidays and endless predictions of what the next year will hold across all fields of endeavour. Since nobody really has any idea what the future holds, looking back on these in twelve months down the line often leads to a good laugh. The wine industry is no different, so why even pretend to have a crystal ball? Because it’s fun. Here are a few predictions for 2015, in no particular order, and not very serious.

Cinsault will continue to gain in popularity to the extent that old farms with plantings will be overrun by hipster winemakers on the hunt to create the next cult wine. 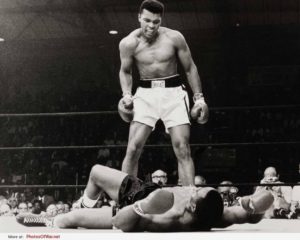 Not the greatest, after all.

Muhammad Ali will renounce his original opinion and tell all that Eben Sadie of Columella fame is actually the greatest there ever was.

Sauvignon Blanc will outsell Woolworths’ rotisserie chickens to become the biggest selling item to the LSM 7+ citizens of South Africa.

Natural wine will go from fringe movement to structured organisation, with a rating system that includes levels from 0 (Highly Unnatural) to 10 (“Who you gonna call? Ghostbusters!” Supernatural).

The Swartland will get the nod from the Dalai Lama as another Holy Land.

US critic Robert Parker will taste the first wine to score 101 on his 100 point system.

Winemakers will lobby for surfing to be acknowledged as a crucial part of winemaking and receive allocated days from employers.

In order to further entrench itself as SA’s most accommodating wine competition, the Veritas Awards will give all wines that enter a medal.

After years of modestly calling himself “just a farmer”, Porseleinberg’s Callie Louw will finally admit that he’s a winemaker.

International businessmen Analjit Singh and Richard Branson will begin a bitter duel that sees them competing to buy up the few remaining farms in Franschhoek not already under their respective ownership.

Stellenbosch will become known as the Napa Valley of the Southern Hemisphere after a landmark tasting reminiscent of the 1976 Judgement of Paris has them resoundingly defeat a line-up of French First-Growth wines.

SAWIS will at last acknowledge that Tulbagh, Paarl and the Swartland aren’t really part of the Coastal Region.

Charles Back of Fairview and Spice Route fame will go firmly into politics, start the Party Party and eventually become Premier (Cru) of the Western Cape.

David Cope owns and runs Publik, a wine bar in Cape Town with a focus on unusual and interesting wines. When he’s not pouring the stuff, he attempts to make wine more fun and approachable as a contributing writer to various local magazines.

The ageability of Cape syrah, especially of the much-lauded new wave examples from Swartland and Stellenbosch, has been a slightly troubling concern for me for a while. A few weeks...