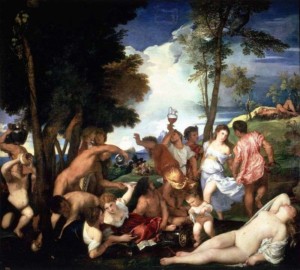 Back in the mid-2000s, I used to write a weekly email newsletter called Gulp!, in which I would regale readers with my misfortunes in courting and the solace I used to find in both wine and music. It was surprisingly popular.

So, anyway, I’m married with kids now and there’s still not just solace but an immense amount of fun to be found in wine and music. The question is: Does this get celebrated enough?

It strikes me that wine media around the world has become rather earnest in the last 10 or 15 years. You might divide wine-related content into two broad sub-sets, the first being consumer-oriented wine criticism (“spitting and scoring”) and the second being high-brow wine journalism which seeks to analyse wine relative to the defining issues of our time. Could there be a third way of addressing the topic?

Wine criticism is destined to always be with us as it meets a demand for wine-buying advice. The key proviso here is that the wines in question must command enough interest and money to be relevant. Only when the stakes are relatively high will consumers seek expert reassurance before making a purchase decision. It’s all about who moves the market and consequently, it will never be pretty.

Issue-based wine journalism, meanwhile, is a worthy pursuit but typically doesn’t amuse or entertain. Topics of the day include “natural wine” as a reaction to excessive technology in the industry through the effects of climate-change to corporatism and the commodification of wine – not exactly LOL stuff…

What doesn’t seem to get written about nearly enough is how wine fits into our everyday lives and the good cheer that it brings. For instance, the last bottle of Columella I drank was the 2009 vintage opened several hours and many other bottles of wine after the final whistle of last year’s Rugby World Cup final which saw the Springboks triumphant and I couldn’t really tell you how it tasted other than it seemed first-class and the memory of its consumption is something I shall treasure forever.

That, of course, was a monumental occasion but wine can also make the mundane more bearable. You are a parent of greater forbearance than me if you don’t find that helping your offspring with primary school homework isn’t a little easier when accompanied by a glass of something refreshing. Yes, I know I shouldn’t exceed my recommended units of alcohol per week but smokers smoke, lovers cheat and politicians lie so I can pretty much live with myself.

And then there’s wine’s central role in communion. I don’t mean the Christian sacrament although wine’s role in this and its inherent mind-altering ability by virtue of its alcohol content is obviously no coincidence. Rather, I mean the gathering of good company to consume good food and good wine and simultaneously share thoughts and feelings that sometimes, just sometimes leads to a sense of connection to something bigger than ourselves. At the very least, we should always remember that dancing on the table lies in the second half of the bottle (or the second half of the second bottle as the case may be…).

Basically, wine is there for our enjoyment. If you don’t get “natural wine” don’t beat up on people who do. If you think climate change is a hoax, what’s wrong with creating a world that’s less wasteful anyway? Rather than despair of how monotonous and neutral mainstream wine often is, be thankful that winemaking is essentially a romantic endeavour that will always defy complete commodification. It was Nietzshce who said “And those who were seen dancing were thought to be insane by those who could not hear the music,” so open a bottle of something good and listen to a few tunes whenever you can.