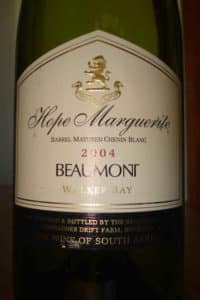 In a masterstroke of brevity, the back label of Hope Marguerite Barrel Matured Chenin Blanc 2004 from Bot River winery Beaumont describes it as “Toasted almonds, rich and rounded”. Drinking it just about seven years on from vintage, the wine is all these things and more: a classic wet-wool note on the nose and then citrus fruit, tangy acidity and the difficult-to-describe complexity that extended bottle maturation brings on the palate. All credit to Platter’s 2006 that rated it 4 Stars and suggested punters “give [it] 3 – 5 years to show its best”.

The 2008 vintage of Beaumont Hope Marguerite got all famous-like when it was judged best white varietal over £10 a bottle at the 2009 Decanter World Wine Awards before being rated 5 Stars in Platter’s 2010. The 2009 vintage was put up for 5 Stars in the 2011 edition of the guide but just failed to make the cut. It’s sold out from the farm but try finding a case in the trade and crack it in 2016 for what is sure to be a sublime drinking experience.

Another very good Chenin Blanc enjoyed recently was the Cederberg Five Generations 2006. This back label boasts that the fruit was from a 33-year old vineyard (planted in 1973) and it is worth noting that the Hope Marguerite comes from a vineyard planted in 1978 – those sceptical about the value of old vines argue that they lack the vigour to ripen the grapes they carry properly but I’m pretty sure that these two wines benefit from being made from well established vineyards.

Both these wines caused me to reflect once again that local Chenin with a little bit of age on it makes for some of the most intellectually and emotionally satisfying drinking to be had anywhere in the world. What’s even more gratifying is that you don’t have to be on a Forbes Rich List to afford them: the Hope Marguerite 2009 went for R135 a bottle from the farm, the Five Generations 2009 is still available at R200.

To mark the launch of the 2020 vintage of Hope Marguerite Chenin Blanc from Beaumont in Bot River, a 2010 – 2020 vertical. It was a reminder first that this...