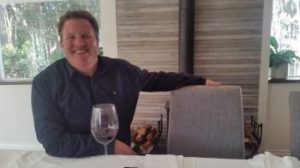 Yesterday six wines from Van Zyl Du Toit to mark his six vintages at Franschhoek property Allée Bleue over lunch at La Colombe restaurant. The food and wine pairings were generally extraordinarily astute, perhaps the most memorable being pan-fried scallop, kimchi and sweetcorn with lemongrass and ginger velouté served with the Chenin Blanc 2011.

Du Toit is quite happy to buy in fruit from around the Cape and this wine was made from half Walker Bay and half own fruit (plus a dash of Viognier), the advantage of incorporating coastal and inland vineyards being full phenolic ripeness at different sugar levels and hence extra complexity rather than the more usual approach of multiple pickings off a single site.

Closed under screwcap, the wine had a marked although not unpleasant reductive character about it. There was also citrus, white peach and yellow apple in evidence, the acidity suitably fresh, the finish savoury. No longer in the first flush of youth but drinking very well and not at all overshadowed by some rather smart cooking. The current-release 2014, which won gold at Veritas this year, sells for R55 a bottle.

Grapes for the Allée Bleue Black Series Old Vine Pinotage come from a Piekenierskloof block of ungrafted bush vines planted in 1976, making for a rather particular wine - the...

Christmas in the winelands 2018

GRANDE PROVENCE, FRANSCHHOEK Six-course menu available from Christmas Eve until dinner on Family Day: R1650 per person (includes a special gift and glass of bubbly on arrival, excludes drinks and...