Trustworthiness of ratings
However controversial wine ratings are, the reason they exist is in order to inform consumer purchase decisions. Given a list of publications and competitions generating such ratings, you were asked to indicate which you considered trustworthy with no limit to how many you could select, the result as follows: 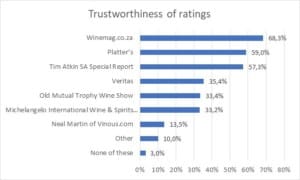 The frequency of wine consumption
Asked how often you drink wine at home, 46% said two or three times a week, 36% every day, 17% once a week and 1% less frequently.

Wine appreciation
The point is often made that most wine is a grape-based alcoholic beverage rather than a product of terroir and hence worthy of contemplation. The users of this site, however, are highly involved with the subject of wine as the following demonstrates:

Asked how often do you drink from “designer” wine glasses such as Riedel, 45% said on special occasions, 33% everyday and 22% never. 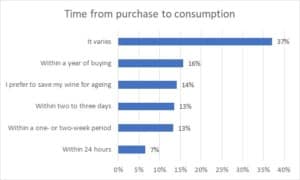 Preferred wine closure
For all the frustration that TCA-tainted wine causes, it would seem natural cork isn’t going anywhere. Asked what your preferred closure is, 61% said natural cork, 24% screwcap and 8% Diam (technical cork). Of note, 6% said they had no preference. 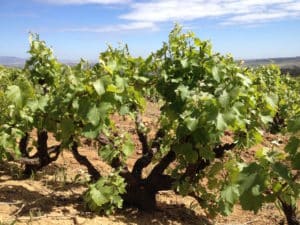 SA’s signature grape
South Africa has more plantings of Chenin Blanc than any other wine-producing nation in the world while Pinotage, a cross between Cinsault and Pinot Noir, first came into being here. Asked if the country had a signature grape, which of the two would it be, 54% voted for Chenin Blanc and 46% for Pinotage.

Favourite other alcoholic beverage
Beer and gin came out joint tops both getting 41% of the vote, ahead of whisky on 33%, “other” on 8% and vodka on 3% (multiple selections were allowed).