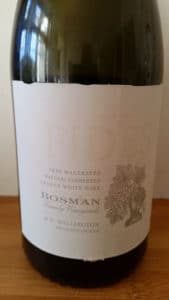 A war story. It was some ten years ago that Chenin-driven, oxidatively made blends started to emerge as a category and as deputy editor of Wine magazine, I proposed that our panel review a line-up of the more prominent examples. The tasters were by no means inexperienced but nevertheless had no idea of what to make of the wines and ratings were poor. We spiked the report.

“Orange” wine is the new cutting edge and again I think it will be a while before they find traction among critics and punters alike. I happen to like them for the counter-point to wines made with a large degree of technological intervention that they offer.

Bosman Family Vineyards in Wellington have just launched an orange wine called Fides 2013. From Grenache Blanc, it underwent spontaneous fermentation on the skins, this lasting three weeks. Maturation was in second-fill oak.

I found yellow peach, apricot, spice and a subtle nuttiness. Really flavoursome, well balanced and nicely pithy on the finish. Not part of the standard range but a “Project of Passion” according to the cellar and this sums it up well. Price: R150 a bottle.

The Optenhorst Chenin Blanc from Bosman Family Vineyards comes from a Wellington vineyard planted in 1952, the third oldest in the country. It was on the verge of being uprooted...

The Bosmans of Bosman Family Vineyards own the third oldest Chenin Blanc vineyard in South Africa, this Wellington block planted in 1952. Winemaker Corlea Fourie makes a top-end wine from...