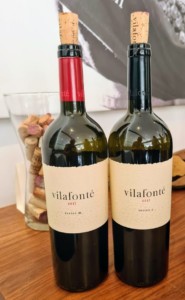 The 2017 vintage is much celebrated and with good reason. Mike Ratcliffe of Vilafonté yesterday arranged a blind tasting involving both the Series C and Series M from this vintage plus 11 other leading examples of Cape Bordeaux Red Blends, all the respective winemakers in attendance in order to “compare and discuss”.

Here is the order of tasting with my ratings alongside (plus the original winemag.co.za rating where applicable):

Some general observations. The overall standard of quality is extraordinarily high although stylistic differences are wide. In the context of this tasting, wines such as Thelema Rabelais, Glenelly Lady May and MR de Compostella looked quite understated while Kanonkop Paul Sauer came across as massively powerful. I considered my two top wines namely Ernie Els Signature and Zorgvliet Richelle as being particularly statuesque – full but balanced.

A big talking point was tannin management and how “polished” a wine should appear. All these wines are aimed at the luxury end of the market and therefore particularly aggressive tannins might be seen to be problematic. Conversely, all agreed that in order to demand a price premium, then these wines need to be age-worthy and at least some firmness of tannin was necessary in order to ensure this.

Though the Series C from Paarl property Vilafonté is priced higher than the Series M, it’s the latter that I prefer among the current release 2016s. Regardless, while both wines...