Lady May, the Cape Bordeaux Red Blend from Glenelly in Stellenbosch, became firmly established as one of the best in category in my mind when the 2015 rated 96 points, emerging ahead of Rauzan-Ségla 2015 from Margaux and Cos d’Estournel from Saint Estèphe in a blind tasting last year – see here.

The 2016 is about to be released and winemaker Luke O’Cuinneagain again showed it blind next to some international benchmarks. 2016 is generally considered a lesser vintage but O’Cuinneagain is of the opinion that, while it had its challenges, commentators would be less critical of it were it spaced further away from the stellar 2015 and 2017. “Some vintages are for the long haul and others offer earlier drinkability,” he observes. Tasting notes and ratings for the four wines (in the order poured) as follows: 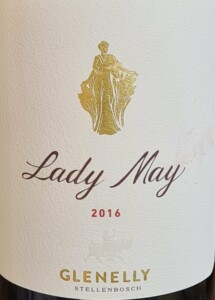 Glenelly Lady May 2016
80% Cabernet Sauvignon, 8% Merlot, 6% Petit Verdot, 6% Cabernet Franc. Matured for 20 months in 300-litre barrels, 75% new. Red and black berries, some herbal lift and oystershell on the nose. Full but balanced – great clarity of fruit, bright acidity and a pleasantly austere finish. Very pure and focused but that much less imposing than 2015.

Shortly after O’Cuinneagain had demonstrated the high quality of his 2016, he revealed that release of 2017 is probably going to be bought forward to keep up with global demand for this cuvée. Another blind tasting then, and the excellence of Lady May was again plain to see. Tasting notes and ratings as follows:

Glenelly Lady May 2017
90% Cabernet Sauvignon, 6% Cabernet Franc, 4% Petit Verdot. Very attractive aromatics of red and black berries, floral perfume, some leafiness and pencil shavings. Lovely clarity of fruit, bright acidity and firm but fine tannins. Excellent structure and focus, all the elements coming together to very pleasing effect. Youthful and on point, this should mature magnificently.

Domaine Eden Cabernet Sauvignon 2016 – Santa Cruz Mountains, California
Red and black berries, some herbal character and attractive oak spice on the nose while the palate is full and round in the best way – good fruit expression, moderate acidity and tannins which are soft and supple. Luxurious but equally still balanced and vinous.

The 2015 vintage of Lady May, the top-end Cape Bordeaux red blend from Stellenbosch property Glenelly, is due for release shortly and winemaker Luke O’Cuinneagain recently hosted a small tasting...

A picture of the beautiful Virginie, Comtesse de Lalande, hangs in the private tasting room at Glenelly Estate in Stellenbosch. I think she’s there to inspire as well as impress,...