Last night, the two presented a public tasting as part of the University of Stellenbosch’s annual Woordfees, the line-up including some notable examples of wines from old vines paired with a Leipoldt-inspired menu by chef George Jardine. 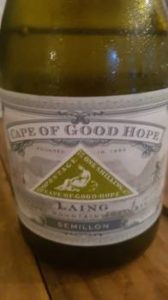 The one wine not previously reviewed was the Rupert-owned Cape of Good Hope Laing Semillon 2014, grapes from  Henk Laing’s farm, Trekpoort, situated on the Skurfberg Mountain between Lamberts Bay and Clanwilliam, two blocks involved one approximately 40 years old and the other 60.

The nose showed straw, lime and lemon, green apple and fresh herbs. The palate meanwhile was rich and broad with a certain waxy quality. Of the wines presented, it seemed the “safest” and as ever with this range, you’re kind of want to see what would happen if the winemaking team really cut loose.

Cape of Good Hope is part of the Anthonij Rupert portfolio of wines, grapes for this white blend from the Riebeeksrivier property on the slopes of the Kasteelberg, neighbours including...

The Cape of Good Hope Van Lill & Visser Chenin Blanc is the Skurfberg offering from Anthonij Rupert Wyne, both Basie van Lill of Arbeidsend and Jozua Visser of Oudam...