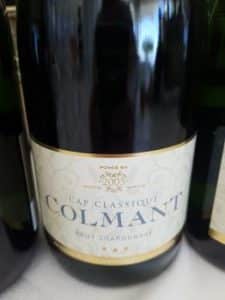 Class in a glass.

The official overall winner at this year’s Méthode Cap Classique Challenge sponsored by cork supplier Amorim was the Anura Brut 2011, but to my mind the Colmant Brut Chardonnay which won best Blanc de Blanc was the stand-out wine.

From 70% Franschhoek and 30% Robertson fruit, it spent 45 months on the lees (the base wine mainly from 2012). The nose shows citrus blossom, lemon tart and brioche. The palate is rich and complex with well integrated acidity and a soft but persistent bubble – good fruit concentration, lovely texture and a gently savoury finish.

Tasting notes and ratings for the other wines to feature as follows:

Anura Brut 2011
In addition to being top performer in the MCC Challenge, this wine also rated 5 Stars in Platter’s 2016 but I think it’s problematic. Deep in colour, it shows both green and bruised apple plus an overt biscuit character before a very savoury finish. The bubble meanwhile is very active but rather coarse.

J.C. Le Roux Pinot Noir Rosé 2010
A subtle floral top note before raspberry. Light and very fresh with an energetic bubble, the finish very dry – quite sherbet-like in the mouth. Clean and correct but lacking detail.

J.C. Le Roux Scintilla Vintage Reserve 2008
Appears very evolved on the nose and palate. Ripe citrus to go with some leesy character, creamy texture and a gentle mousse. A bit odd but not unsatisfying.

Paul Gerber will shortly be joining Colmant Cap Classique and Champagne in Franschhoek as winemaker. He was previously at nearby Le Lude where he was instrumental in establishing this cellar...