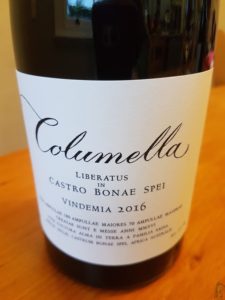 Through a glass darkly.

Columella 2016, as made by Eben Sadie and Paul Jordaan, has the lowest level yet of Syrah, this variety down to 48% and the rest of the blend consisting of Mourvèdre, Grenache, Cinsault, Tinta Barocca and Carignan, Sadie saying of Syrah that he increasingly considers it a variety that lacks some depth and complexity. “It makes wines which are either peppery and spicy or spicy and peppery,” he quips.

Aromatically, the 2016 has more base than top notes – dark fruit, black olive, scrub, earth and spice. It makes a massive impression in the mouth – great depth of fruit, driving acidity and firm but fine tannins combine to quite stark effect. It’s, not a weighty wine, however, the alcohol at 13.7% the lowest since the maiden vintage 2000. It’s a pretty hardcore drinking experience right now and should probably only really be broached five or so years down the line. Wine Cellar price: R865 per bottle.

Whereas the current-vintage Columella 2017 from Swartland producer Sadie Family Wines consists of Syrah, Mourvèdre, Grenache, Carignan, Cinsault and Tinta Barocca that was matured for 12 months in barrels (8%...

Can the South African wine industry scale? Is it capable of producing a 100 000-case wine that consistently rates 90-plus on the 100-point scale according to most commentators? During the 1950s,...