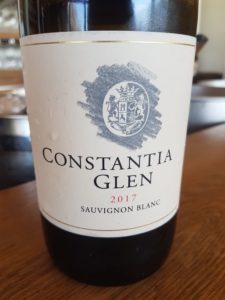 In a good place.

Justin van Wyk started as assistant winemaker at Constantia Glen in 2008 before taking over full responsibility in 2011 and to celebrate a decade of his tenure at this property, a vertical tasting of Sauvignon Blanc from 2008 to the newly released 2018.

Van Wyk also makes an accomplished Sauvignon Blanc-Semillon blend that goes by the name of “Two” since the 2011 vintage and it’s interesting to note that the straight Sauvignon has included a small portion of Sem since 2009, originally some 10% or 12% but now down to 2% in the case of the 2018.

Another rather predictable observation to make is that based on this tasting, top-end Sauvignon Blanc generally gets drunk far too early. The 2017 is just about coming into its own – it’s filled out and only gained in composure since lasted tasted in January. The 2018, meanwhile, appears almost ridiculously primary. It’s on the market so here goes with a rating: A heady nose of blossom, pear and peach through breakfast punch to blackcurrant and a little spice. The palate shows concentrated fruit matched by zingy acidity but is rather unresolved – perhaps not quite as complete as 2017. Price: R180 a bottle.

Sauvignon Blanc is South Africa’s fifth most planted variety, area under vineyard having increased from 8 406ha in 2006 to 9 246ha in 2016. It remains extremely popular and just...

While you can get excellent entry-level Chenin Blanc, Sauvignon Blanc at the same price is usually pretty bland stuff and if you want some excitement from the latter variety you...