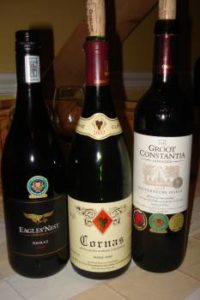 At dinner last night as part of the second annual Constantia Fresh weekend organised by Jörg Pfützner of Fine Wine Events, another chance to see how South Africa stacks up against the best of France. Whereas the local wine industry generally had an unduly high opinion of the quality it was capable of 15 years ago, it’s now perhaps not confident enough about its product, at least at the top end of the market. That said, less bravado and more attention to detail when it comes to what’s actually in the bottle is no doubt a sign of hard lessons learnt doing business in the unforgiving global market post political transformation.

Flight of the evening was Eagles’ Nest Shiraz 2008 vs. Domaine Clape Cornas 2007 vs. Groot Constantia Gouverneurs Shiraz 2006. Earlier there’d been much debate about wine competitions and whether they’re at all useful. My position once again: it’s unreasonable  to expect one set of results taken in isolation to be absolutely reliable, but consider results across multiple competitions and you quickly discover who’s hot and who’s not. The Eagles’ Nest and Groot Constantia wines both came highly decorated and with good reason. The Domaine Clape meanwhile is a benchmark producer from the appellation south of Hemitage known for its sturdy, strong-flavoured Syrah.

In recent times I have become a little disillusioned with Shiraz (both local and Rhône) as a variety on account of how downright ordinary the resulting wines so often appear but here was a cracking line-up. All the wines shared a very highly level of quality in basic terms but it was how differently the duo from Constantia expressed their place of origin relative to the one from Cornas that made them really intriguing (if the notion of terrior is not entirely fanciful, then this is entirely as things should be).

Contrary to the usual dichotomy that holds that Old World wines will always be more elegant than their New World counterpart, it was the Cornas which appeared the most exuberant of the three with an abundance of ripe red fruit and spice, while the two Constantia wines were more restrained and even twitchy by comparison with more black fruit and cracked pepper. All three exhilarating to drink.

Tim James: 120 Years Since the Pest Phylloxera Came to Constantia

“The 26th November, 1898, will always remain a red-letter day in the history of Constantia”. So wrote JP de Waal, manager of the government wine farm, Groot Constantia, in his...