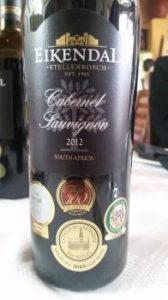 Is it possible to make too perfect a wine? Nico Grobler has been senior winemaker at Eikendal since 2009 and recently showed a vertical of his five Cab vintages which have been released to date.

Grobler is an advocate of berry sugar loading as espoused by Alain Delloire, professor of viticulture at the University of Stellenbosch from 2009 to 2012 and now in Australia. Basically, it’s a new way of understanding the ripening process which helps producers better determine optimum picking. Sugar per berry increases fast before reaching a plateau after which a fresh fruit period, a neutral period and a mature fruit period follow in turn. All the while, pyrazine and general astringency are dropping. There is not a single optimal harvesting date but several depending on the style of wine that is desired but essentially the producer wants to avoid picking during the neutral phase.

In addition to applying berry sugar loading analysis (which involves opening up the vine canopy to get greater light intensity on to the bunches to facilitate the ripening process), Grobler has also moved from working with 80% old vines (planted N – S and infected with die-back disease) in 2009 to 100% new vines in 2013.

It’s a LOT more complicated than above but when so many consumers expect top-end wine to be weighty and powerful, and given how much the concept of berry sugar loading is starting to take hold, a lot of producers are going to do everything in their power to pick in the mature fruit phase…

2010
Ultra-ripe but intriguingly displays both red and black fruit character – strawberries, cherries, cassis. Rich and broad – particularly plush with fine tannins. Acidity is bright to the point of tart.
Score: 86

2012
Dark fruit, violets and attractive oak on the nose. Massive fruit concentration – despite a relatively low alcohol by volume of 14.27%. Good freshness and optimally ripe tannins. Neither green nor sweet but curiously not that approachable at the moment. Almost too good to be true but will surely benefit from time in bottle.
Score: 90

2013
Current release: R185 a bottle
Red and black fruit, a floral note plus chocolate and spice. A slight leafiness but particularly low pyrazine levels! Lovely fruit expression – rich and dense with fine tannins. Perhaps a little hot on the finish but seductive.
Score: 89

There are few more consistent red blends intended for everyday drinking than Charisma from Eikendal, the current-release 2018 rating 90 on the 100-point scale in this year’s Signature Red Blend...

Eikendal Infused by Earth Chardonnay 2016 Price: R485 Grapes from a bushvine vineyard planted on granite in 2010, one hectare in size and a particularly wind affected. Matured for 16...

Win a six-bottle mixed case of wine made up of some of the top performers from the recent Prescient Chardonnay Report. Featured wines: Delaire Graff Banghoek Reserve 2016 – 95/100...