The maiden 2014 vintage of Hades was shown yesterday next to the 2013 vintages of the other two, the idea eventually being to have the same vintage of all three on the market at the same time. Tasting notes and ratings as follows:

Haskell Aeon 2013
Price: R320
Black fruit and pepper on the nose. Rich and full yet not short of freshness, the tannins firm in the best sense. A statuesque wine.

Haskell Pillars 2013
Price: R320
The nose shows red and black berries plus some vanilla. Plenty of power on the palate – sweet fruit on entry, the tannins quite soft. Has a real glossiness about it. 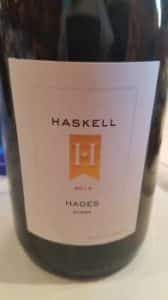 Haskell Hades 2014
Price: R320
Over 180 tons of rock dug up to establish the vineyard! Red and black fruit, fynbos and some floral perfume, pepper and a hint of vanilla. The palate has a lovely purity about it with concentrated fruit, fresh acidity and fine tannins. Really sophisticated – full but not unctuous.

The fourth annual Christian Eedes Chardonnay Report presented in conjunction with Sanlam Private Wealth is now out. This involved putting together a line-up of 60 high-profile wines, either currently available...