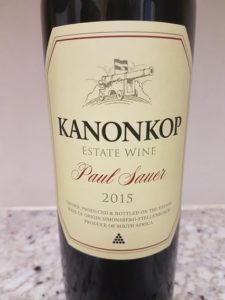 The 2015 vintage of the Cape Bordeaux Red Blend that is Paul Sauer from Stellenbosch property had not been released when the winemag.co.za panel convened in mid-June to taste the category (see here) but it has subsequently become commercially available and a review is therefore due.

My assessment of the Kanonkop Paul Sauer 2015 was necessarily going to have to take place sighted rather than blind but given that this  is just about an iconic wine and the 2015 vintage is much heralded, how to put it into some kind of meaningful context?

I opted to taste it next to Meerlust Rubicon 2015, a wine that received a 94-point rating when I tasted it sighted (see here) and an 88-point rating from the winemag.co.za panel when tasted blind (the point has been made before that wines very often score lower in blind tastings than they do in sighted tastings – removing all knowledge of pedigree in order to ensure some kind of impartiality is the key reason for subjecting wines to blind tastings but judges do tend to be more severe in their judgements).

“Curated” is an over-used word at the moment but I guess the biggest insight about drinking these two wines side by side was just how carefully curated they are, both so typical of their respective house styles, these established over decades, the maiden vintage of Rubicon having been 1980 and that of Paul Sauer the year after.

The Paul Sauer 2015 has a terrifically complex and decadent nose – red and black fruit, violets, incense, earth, vanilla, cinnamon and other oak spice. The palate is rich and broad but very well balanced – succulent fruit and nicely grippy tannins. There’s a noble rusticity about it, which is to say it’s none too polished, but this is a character which has always marked this wine and always will.

The Rubicon 2015, by contrast, looked leaner and cleaner, more focused and with a lovely cool quality to it. Dark fruit, crushed herbs and a hint of reduction. Less full bodied, snappy acidity, finer tannins, the finish long and intensely savoury.

So what to score the Paul Sauer? Two points: 1) I found it a tad more forceful/less elegant than the excellent 2014 which rated 95 (see here); 2) while there are terroir and/or stylistic differences between Paul Sauer 2015 and Rubicon 2015, there’s nothing to choose between them in terms of sheer quality.  In light of these considerations, I’m compelled to rate the Paul Sauer 2015 94 points, the same as the Rubicon 2015.

One last thought on these two wines. Part of the reason that they both have such a devoted public following is that they have stood the test of time – they are serious brands but also intrinsically serious wines. When reviewing them sighted, it is perhaps beholden on the critic to factor this in – history and background is worth a point or two extra. That said, while they are among South Africa’s best, I’m not sure they are the very best bound, as they are, by their respective traditions.