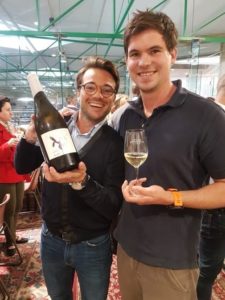 Clément Jolivet and Matt Day with Metis 2014 from magnum.

Metis Sauvignon Blanc is the collaboration between Klein Constantia and Sancerre producer Pascal Jolivet, the current-release 2016 selling for R230 a bottle which positions it between the property’s Estate bottling at R135 and the limited-release bottlings like the 361 & 372 2015 at R290. Vinification involves spontaneous fermentation and minimal Sulphur additions but winemaker Matt Day says he’s intention is not to make a “funky, orange wine” but rather something that truly reflects his terroir and it has to be said the wine has impressed with its purity and tension ever since the maiden vintage 2013.

Yesterday, Day showed all four vintages to date, 2013 through 2016, next to some top international examples providing a useful calibration exercise when it comes gauging quality. From the rest of the world was Greywacke 2013, Pascal Jolivet Sancerre 2016, Pascal Jolivet Pouilly-Fume Indigene 2014 and Didier Dagueneau Blanc Fumé de Pouilly 2014.

Suffice to say, the Metis easily held its own. The Greywacke was super-intense with plenty of tropical fruit character (score: 90/100), the Jolivet Sancerre 2016 supremely elegant (93/100), the Jolivet Pouilly-Fume Indigene 2014 absolutely riveting both in terms of aromatics and the focus of the palate (94/100) and the Dagueneau Blanc Fumé de Pouilly 2014 fascinating but extremely funky (89/100).

Some observations: Firstly, Metis is starting to demonstrate excellent age-worthiness – my scores for the 2013 and 2014 turned out to be exactly the same as on release.

Secondly, Pyrazine-derived “green” character is inescapable when it comes to Sauvignon Blanc – all eight wines yesterday showed some element of this – but it’s a matter of degree and it can be “nice” or “not nice”. Interestingly, Klein Constantia managing director Hans Astrom declared that the Metis 2015 was his least favourite vintage to date because of how green it had turned out in bottle. I thought it made a big impression: A complex nose with notes of fresh herbs, cucumber, green pepper but also a touch of blackcurrant while the palate is rich and full with coated acidity and a savoury finish.

While Klein Constantia is known first and foremost for the iconic sweet wine Vin de Constance, it’s also built a reputation for top-quality Sauvignon Blanc over the years. Frankly, however,...