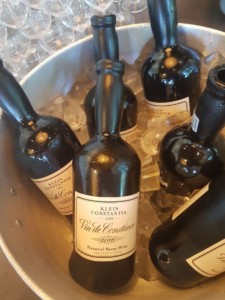 At the recent Cape Town lunch function to launch the 2016 vintage of Vin de Constance from Klein Constantia,  managing director Hans Astrom said “We’re making like they do in Champagne and serving the same wine throughout the meal” – the maiden 1986 with duck terrine, the 2007 with crayfish, the 2012 with pork belly and the 2016 with cheese.

Astrom and winemaker Matthew Day make no secret that they are attempting to take the property’s famous late-harvest sweet wine Vin de Constance in a relatively lighter, fresher style. Why, you might ask? Well, the wine is something of an anomaly in that it is succeeding precisely at a time when the world’s other great sweet wines are faced by declining demand in the marketplace. Of course, Vin de Constance has got plenty of heritage, which accounts for some of its appeal, but what the astute KC team have realized is that it’s important to make the wine in such a way that it gives it more rather than fewer drinking opportunities. In a good vintage, total production can be as much as 35 000 bottles and you don’t want punters only drinking it on milestone birthdays…

My impression of the 2016, however, was that while the pursuit of elegance ostensibly makes sense, there might come a point where Vin de Constance is too pared down…  Tasting notes and ratings for the 2015 and 2016, both previously unreviewed on this site, as follows:

Klein Constantia Vin de Constance 2015
Wine Cellar price: R1 095
An amazingly complex nose of orange, apricot and caramel plus notes of floral blossom, mint and other fresh herbs, ginger and other spice. The palate is rich and full yet energetic thanks to a cracking line of acidity, the finish long and savoury. Impressive but perhaps not as nuanced or complete as 2013 and 2014.

Klein Constantia Vin de Constance 2016
Price: TBC
A delicate and quite primary nose – lemon, a certain leafy quality, some floral perfume and a little ginger. The palate is clean and fresh – remarkable fruit purity, the finish long and pithy but definitely slighter, less opulent than other vintages of recent times.