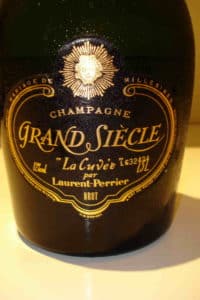 Harold Eedes, my late dad, would have turned 66 on Friday. In his memory, a magnum of Laurent-Perrier Grand Siècle “La Cuvée” NV. Grand Siècle refers to the 17th century when Louis XIV ruled and a period of great prosperity for France.

A bit of Internet research reveals that the wine is approximately half Chardonnay and half Pinot Noir, with the former usually slightly higher. A curious attribute of it is that it is always a three-vintage blend. What was striking about drinking the wine was just how well structured it was with plenty of reigned-in power; rather undemonstrative but still utterly convincing.

Yesterday we headed off to Churhaven up the West Coast for an early celebration of another birthday, this time my father-in-law’s, who turns 69 tomorrow (happy birthday, Naas).

The bubbly of the day was Constantia Uitsig Brut 2006. This is a Méthode Cap Classique that I’m not overly familiar with as it sells for R245 a bottle and only 500 cases are made. It’s from 100% Chardonnay, 40% of it matured in old oak and the bottle we had was the last disgorgement of the 2006 having spent 45 months on the lees.

Drinking it at leisure, I thought it was pretty smart showing subtle brioche character to go with the ciean, pure citrus fruit you’d expect from cool-climate Constantia. It’s more dry than most with a residual sugar of 6g/l, which further contributes to a super-elegant glass of fizz.

When I reviewed the 2011 vintages of both the single-variety Semillon and the white blend from Constantia Uitsig for the 2013 edition of Platter’s, I rated the former 3½ Stars...