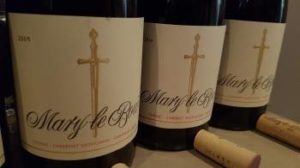 Mary le Bow is a joint venture between Bruce Jack of Flagstone fame and the Frater family who farm in the hills above Ashton. Jack describes the label as “under the radar”, the wine only made occasionally) and production typically around 300 cases. The core of this wine is Cabernet Sauvignon from a virus-free vineyard planted in 1976 plus Shiraz as grown of the Frater’s property but other “bits and pieces” from elsewhere included as Jack sees fit.

Last night Jack showed all vintages to date, namely 2003, 2005, 2007, 2009, 2011 and 2014, and it proved an impressive line-up, the wines typically displaying a reined-in power and a particular age-worthiness. The 2003, for instance, was rated 4 Stars in the December 2004 issue of Wine magazine, panel chair the late Tony Mossop suggesting then that it would be good for another seven or eight years but it is still showing remarkably well. Only the 2009 disappointed – not carrying its 15% alcohol well but Jack had the grace to admit that the Cab was picked too ripe that year.

The current-release 2014 is a blend of 42% Shiraz, 33% Cabernet Sauvignon and 25% Merlot, matured for 16 months in mostly French oak, 30% new. It shows black fruit, pepper and spice plus some vanilla on the nose while the palate is rich and full with a certain sleekness about it. Very primary now, it should prove good drinking between 2019 and 2024 if its predecessors are anything to go by. Price: R260 a bottle.

Flagstone Winery is owned by fifth largest wine company in the world Accolade Wines, and the house style is intended to appeal to the broadest possible audience, the wines typically...