Will local Riesling ever amount to much? The observation was once made that all the spots most suited to the variety have been planted to Sauvignon Blanc so a world-class version is unlikely. It was SA’s 30th most planted variety at the end of 2014 with 164ha in the ground having declined from 290ha in 2004. 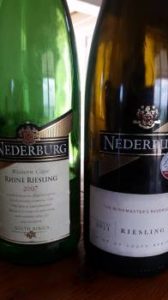 Over the week-end, the Nederburg Rhine Riesling 2007 (as it used to have to be called to differentiate it from Cape Riesling or Crouchen Blanc) next to the Riesling 2011. Scores and tasting notes as follows:

Nederburg Rhine Riesling 2007
Pronounced terpene character but also a little apricot and some nutty, earthy notes from time in bottle. Rich and full (abv 13%) with tangy acidity. A bit short on refinement but true to the variety and not entirely unsatisfying.

Nederburg Riesling 2011
A floral top note before lime and white peach and some subtle terpene character. Pure fruit with zippy acidity – well balanced if not super-detailed.