“The issue when it comes to Cabernet Sauvignon,” says Philip Constandius, winemaker at Oldenburg Vineyards in Stellenbosch, “is to manage the pyrazines. You can’t wish them away. You have to manage them.”

This remark was made during a vertical tasting of the property’s Cab from the maiden 2008 to 2014 vintage and what was fascinating about the exercise was to see how Oldenburg has gone about trying to define a house style. It appeared to me that from 2008 to 2011, the brains trust went in pursuit of bigness whereas from 2012 onwards, the wines appear more medium bodied and readily accessible. 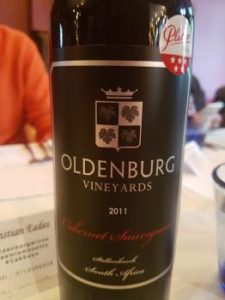 The 2011, which placed in the top 10 of the 2014 Cab Report as convened by me before going on to rate 5 Stars in the 2015 edition of Platter’s, was the stand-out wine showing plenty of fruit concentration but also balance and is set to drink well for many years to come. The 2010, in contrast, appeared very ripe  – sweet on entry, soft tannins and a hot finish. I didn’t care for it but needless to say, there were others present who liked it very much. I liked the 2008 despite myself on account of its luscious fruit while the 2009 seemed quite severe.

The currently available 2012 (91 points in the Cab Report 2015) is a particularly elegant rendition of the variety showing both red and black fruit plus some attractive herbal character.

The 2013 (87 points in this year’s Cab Report) and 2014 are not yet released and as mentioned appear quite a bit lighter than what has come before – not displeasing to drink but equally not as substantial as the excellent 2011. As ever, how to please both consumer and critic?

Wine Cellar, our preferred wine merchant, stocks the 2012 at R195 a bottle.

Oldenburg Vineyards in Banhoek has appointed Nic Van Aarde, previously of Warwick, as its winemaker, with effect from 1 November 2018. Current general manager and winemaker Philip Costandius will be...

Single-variety Viognier has always been a tough nut to crack under local conditions but that hasn’t stopped Philip Costandius, winemaker and MD at Stellenbosch property Oldenburg Vineyards from trying. The...