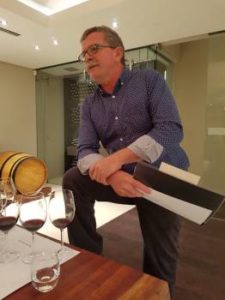 Oldenburg Vineyards in Banghoek, Stellenbosch (see images here) was acquired in 2003 by Adrian Vanderspuy, who began a process of rejuvenation the property having suffered from a period of neglect. That process of overhaul and upgrading is ongoing and yesterday winemaker Philip Constandius presented a  tasting of the top-end Bordeaux-style red blend called Rhodium from 2010 through 2014, which is to say all vintages made to date.

The current-release 2012 (R300 a bottle) is a blend of 53% Merlot, 40% Cabernet Franc and 7% Malbec and was matured for 19 months in 300-litre French oak, 50% new. On the nose, predominantly red fruit with some attractive oak spice while the palate is medium bodied with moderate acidity and soft tannins. It’s likeable but rather straightforward and rated 85 in the RisCura Red Hot Wine Awards last year (see here).

Constandius and team, who have decided to use Bordeaux’s Right Bank as inspiration, are inclined to make the wine even more Merlot-driven going forwards and the 2013 consists of 75% Merlot, 15% Cabernet Franc, 5% Petit Verdot and 5% Malbec, the 2014 of 80% Merlot and 20% Petit Verdot. It seems a slightly strange decision given that the farm is situated in the heartland of Cabernet Sauvignon and that it’s single-variety Cabernet Sauvignon is starting to shape as its most successful variety. On the other hand, there’s an affluent market sector that loves all things Merlot and if Oldenburg can get it right, then they should be quids in.

Oldenburg Vineyards in Banhoek has appointed Nic Van Aarde, previously of Warwick, as its winemaker, with effect from 1 November 2018. Current general manager and winemaker Philip Costandius will be...

Single-variety Viognier has always been a tough nut to crack under local conditions but that hasn’t stopped Philip Costandius, winemaker and MD at Stellenbosch property Oldenburg Vineyards from trying. The...