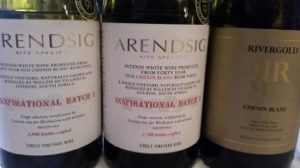 Yesterday a chance to re-visit the 2012 and 2013 vintages of Inspirational Batch 1 Chenin Blanc, made from an old Rawsonville vineyard. I was a big fan of the 2012 on release (see here) and it’s still looking good if stylistically pretty far out (some will not be able to tolerate the V/A but I think it makes the wine).

The 2013, meanwhile, saw a “more clinical” approach – the grapes coming off the vines before the heat of the day for one thing and no malolactic fermentation for another. It’s shows citrus, peach and a little leesy complexity. Good fruit concentration, snappy acidity and a pithy finish. Excellent but staid in comparison to the 2012. It’s still available at R150 a bottle and I scored it 90/100.

The revelation of the tasting was Rivergold Chenin Blanc 2010, from a property just south of Arendsig which Van der Westhuizen made under contract. From a vineyard over 30 years old planted on alluvial soils with lyre system trellising, fermentation occurred spontaneously, maturation in older barrels lasting 10 month.

Pale yellow with a green tinge, it appears extraordinarily youthful in colour. An exquisite nose of pear, white peach, lemon, sultanas, potpourri and spice; pure fruit and wonderfully zingy acidity on the palate; and a finish which is extremely long and pithy.

A wine of great finesses and quite thrilling to drink. It’s still available at R85 a bottle and I scored it 94/100. Van der Westhuizen thinks he might be on to something and from the 2015 vintage has given up the Rawsonville vineyard for this one to make Inspirational Batch.

The 2015 vintage of Chenin Blanc that Arendsig winemaker Lourens van der Westhuizen makes as part of his Inspirational Batch series is something particularly special (see here) but the Grenache...