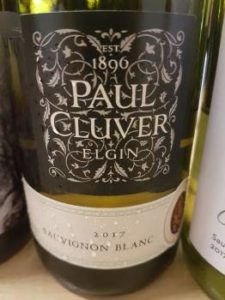 On Friday, Paul Cluver Estate in Elgin held a tasting to gauge the quality of its own Sauvignon Blanc against some of the other leading practitioners of the variety locally. There were 24 wines in all, 17 from the 2017 vintage and five from the 2016 vintage, with these tasted blind in three flights of six and one of four.

Some general observations: The overall standard of top-end South African Sauvignon Blanc is now very good with producers possessing a good understanding of how to get pyrazines (chemical compounds responsible for “green” aromas and flavours) to play off against thiols (tropical fruit) to best effect. In addition, acidities seem much better integrated than even a few years ago, the old joke of having to keep antacid to hand when drinking Sauvignon less and less applicable.

Producers are legally allowed up to 15% of Semillon in their wine and obviously are going to exploit this ruling if they feel it will make a better wine. Past a certain point, however, and some of the wines start to have the weight  and complexity of a “Bordeaux blend” rather than the purity of a single-variety Sauvignon – the Spier Creative Block 2 2017 contains 14% Semillon, while the Paul Cluver 2017 9% as does the Cape Point Vineyard 2016. A case of wanting to have your cake and eat it, too?

Regarding the top wines, the Cape Point Vineyards, which  is matured in older 600-litre barrels for 15 months in addition to featuring Sem, appeared noticeably if winningly oxidative relative to everything else. The La Motte Pierneef, meanwhile, impressed all in attendance with its precision while the Diemersdal Reserve and the Groot Phesantekraal both managed to combine complexity and balance with forcefulness.

The Pinotage Reserve 2018 from Diemersdal in Durbanville is highly decorated – among the winners in this year’s Absa Top 10 competition and 5 Stars in Platter’s – and it...