If vertical tastings are rare, then bubbly verticals are almost unheard of but John and Karen Loubser of Silverthorn Wines did precisely that yesterday showing the 2007 to 2014 of their Blanc de Blancs The Green Man and the 2009 to 2012 of their special cuvee Jewel Box.

The Green Man, from grapes grown on the Loubsers’ Robertson farm, was first made in 2004 and has become one of South Africa’s leading examples. A key take-out from the vertical is that the wine generally becomes more complex but arguably less racy and vivid with time on cork. That said, the 2009 was still very tight while possessing plenty of detail – my favourite of the flight. 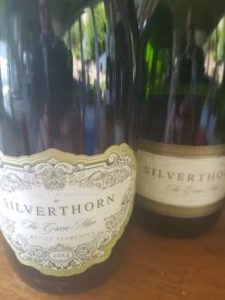 The newly released 2014 (approximate retail price: R210 a bottle) is very primary right now – a touch of reduction as well as citrus blossom and green apple on the nose, the palate lean and fresh with a very fine mousse, the finish long and saline.

The Jewel Box is made in smaller quantities (3 500 bottles compared to 7 500 in the case of Green Man) and spends more time on the lees (42 months compared to 24 to 32 months). A Chardonnay-Pinot Noir blend, it’s altogether richer and more substantial than Green Man, perhaps a more multifaceted bubbly but somehow not quite as captivating. The 2011 is drinking beautifully right now, however, the Pinot supplying red fruit characteristics that you won’t find on Green Man.

When the 2016 Cape Winemakers Guild Auction wines were shown publically last year, the Pinot Noir over which most people went bananas was the Seadragon 2015 from Newton Johnson Family...