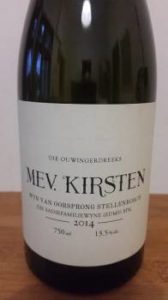 The Stellenbosch vineyard in question was owned by Mrs. Kirsten and generally recognized as the oldest planted to Chenin Blanc in the country, it having been established between 1905 and 1920.

The nose appears quite shy – there are notes of citrus and peach, both white and yellow and if you look hard enough, flowers, dried herbs and a little lanolin. The palate is rich but still fresh – pleasantly thick textured with nicely coated acidity before a salty finish. Acquired from Wine Concepts on Kloof for R803.50 a bottle.

Skurfberg 2018From Olifants River Chenin Blanc. Harvest reduced by 70% because of the drought. A compelling nose of pear, peach, citrus, herbs and flowers. The palate shows great purity and...