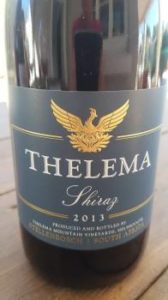 Another arrow in the quiver.

Stellenbosch property Thelema is well known for its Cabernet Sauvignon but has also made a Shiraz since the 2000 vintage which perhaps deserves more appreciation than it gets.

The current release is 2013 is largely from two vineyards planted in 2000 and 2001 but also includes 8% Grenache. Winemaker Rudi Schultz incorporates at least 50% whole berries in the fermentation to preserve fruit, while maturation lasts 18 months in French oak barrels, 35% new.

It’s already drinking very well – on the nose, a subtle and intriguing note of reduction before red and black berries, white pepper and a floral note in the background. The palate possesses a good core of fruit with fresh acidity and properly ripe tannins. It’s full but not too opulent and worked a bomb with kettle-braaied chicken. Price: R165 a bottle.

I matriculated in 1988 when military conscription for white males was still compulsory, deployment for many at that time involving being sent to the townships to put down unrest by...

Schultz Family Wines is the own label of Rudi Schultz, winemaker at Thelema in Stellenbosch, the current releases bearing labels depicting favourite surf spots, these winning gold at the recent...

What to make of the divergence in ratings between the two vintages? When Thelema announced that winemaker Rudi Schultz would be presenting a tutored tasting of a selection of vintages...