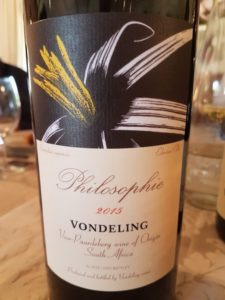 Matthew Copeland of Vondeling in the Voor-Paardeberg is nothing if not meticulous in his approach to winemaking. The newest wine in the range is a top-end Cape Bordeaux Red Blend called Philosophie, the 2015 launched yesterday after the maiden vintage 2014 .

The wine consists of 85% Cabernet Sauvignon, 7% Cabernet Franc, 6% Merlot and 2% Malbec – the Cab Sauv component from a much-prized block planted in 1999. Cold soaking occurred for five days before spontaneous fermentation was allowed to take place. Maturation occurred in new 300-litre barrels, components kept separate for 14 months before being blended and returned to barrel for a further eight months.

Also on show was the 2017 vintage of the property’s renowned Cape White Blend by the name of Babiana, this a blend of 64% Chenin Blanc, 19% Viognier plus equal parts Grenache and Roussanne (price: R190 a bottle). The nose shows a pronounced leesy/waxy note plus citrus and stone fruit while the palate is very flavourful with a greasy texture but equally vibrant acidity. Editor’s rating: 90/100.

Monsonia 2015, meanwhile, is a red blend from Rhône varieties, previously known as Erica. Consisting of 85% Syrah, 6% Mourvèdre, 5% Carignan and 4% Grenache, this has a brooding nose of black fruit, fynbos, vanilla and a hint of reduction. The palate is big and bold with dense fruit and smooth tannins, the finish long and savoury (price: R215 a bottle). Signature Red Blend Report rating: 90/100.

Win a six-bottle case of wine from Vondeling!

Vondeling in Voor Paardeberg pays tribute to a rare species of fynbos with a change in name for its top-of-the-range red blend from ‘Erica’ to ‘Monsonia’ and you can win...