Pétillant-naturel – abbreviated to “pét-nat” among hipsters and involving the méthode ancestrale of production, i.e. stopping an unfinished fermentation and then bottling the wine before allowing the fermentation to complete, a risky and unpredictable technique resulting in wine less fizzy than that made by the Champagne method (a secondary fermentation enacted by adding sugar and yeast) – is a small but growing category in South Africa.

In order to take some kind of measure of things, a line-up of seven current-release examples was assembled and tasted blind by a panel including Matthew Copeland of Vondeling, Peter Ferreira of Graham Beck, Francois Haasbroek of Blackwater Wine, Francois Rautenbach of Singita and me.

Tasting notes and ratings for my top two wines as follows: 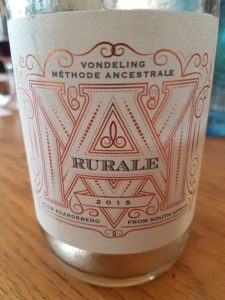 Vondeling Rurale Blanc de Noir 2015
Price: R265
From Pinotage. 28 months on the lees. Peach, blood orange and red apple plus some subtle yeasty character on the nose. Concentrated fruit, bright acidity and a soft bubble before a savoury finish. Very tasty and more-ish in a category where some of the wines are just plain weird.

Babiana, from Voor Paardeberg property Vondeling and named after Babiana Noctiflora, which is a rare species of fynbos found only on that mountain, is one of the more established Cape...

Matthew Copeland of Vondeling in the Voor-Paardeberg is nothing if not meticulous in his approach to winemaking. The newest wine in the range is a top-end Cape Bordeaux Red Blend...