Anna Trapido: Not that healthy and the flavours are vile – so why do people vape? 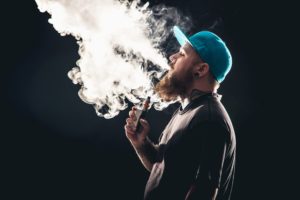 It seems as if every shopping centre in the country now has a stall or store packed with teeny tiny bottles of those liquids that attach to e-cigarettes. The aforementioned liquids are heated to a vapour and the resultant aerosol is inhaled and exhaled. Hence the verb to vape.

I am not normally a smoker of any sort but I have long been fascinated by the plethora of food and drink related e-cigarette liquid flavours. Every time I walk past the shop in my local mall I wonder. So, this week I stopped wondering and started vaping up a storm. Given my lack of experience with such stuff, there was quite a lot of coughing and spluttering too.

Don’t try this at home folks. I did myself damage so you don’t have to. Medical researchers are still in the early stages of assessing the potential health hazards of vaping but it is incumbent upon me to remind readers that these cute little bottles can and often do contain nicotine. Plus, there are potential toxins in some of the flavouring ingredients. Recent studies seem to show very bad things happening to mice when they vape to excess. Other investigations have found fruit flavours to be toxic for tadpoles.

I knew all of the above but curiosity and the pull of food flavoured vape liquids overcame my concerns. Essentially, I wanted to know whether I could recognize the flavours without looking at the label. So, I conducted a (somewhat tongue in cheek) taste test. I got the über-obvious ones (cherry, cola, orange) right but not much else.

I am proud to say that I was spot on with blue cheese vape juice which was unsettlingly accurate and also an absolute abomination. I also correctly identified espresso flavoured vape liquid as coffee but not in a good way. Anyone who has ever tried to drink old takeaway coffee once it has spent an afternoon oxidizing in a hot car will recognize that taste. I was almost right about buttered popcorn flavour (I said butter). Other near misses were saying cinnamon for what was meant to be pumpkin pie and vanilla for birthday cake.

After that, I became increasingly inaccurate. I couldn’t tell the difference between bacon and beer. Milk flavour utterly eluded me. The man in the shop had sold out of Merlot flavour so I couldn’t try that and I didn’t sample the vape liquids labelled unicorn or stoned Smurf (yes, that is a real flavour) because I didn’t know how to measure epicurean accuracy when it came to mythical beasts or cartoon characters. Also, I was feeling quite sick.

The mouse and tadpole scientific study subjects had no choice in the matter but, having vaped up a storm, I cannot understand what drives uncoerced human vapers. E-cigarettes are often used by those trying to quit ‘real’ cigarettes. Since a side effect, the aforementioned cancer sticks can be smell and taste dysfunction, I can only imagine it is this that allows them to tolerate the vileness that is vaping.