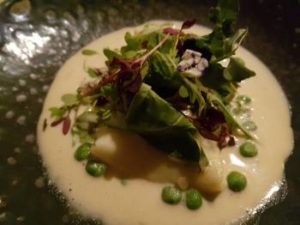 Fresh peas and taragon raviolle from The Foodbarn, Noordhoek.

A recent back-and-forth on Twitter between some winos and chef-types (see here) piqued my interest around the issue of protecting food (and, specifically signature plating) in terms of intellectual property. The conversation began with the question of whether or not restaurants should allow customers to take pictures of dishes. This led to comments around how the food technically belongs to the chef until the guest has paid for it and also the concern that signature plating ideas could be copied or stolen from such images.

All valid concerns when you think about it in terms of ownership and protecting your intellectual property – and it’s not like it hasn’t happened before. In 2006, Robert Wickens of the (now closed) Interlude in Melbourne was accused of copying dishes from US chefs Wylie Dufresne, Jose Andres and Grant Achatz. In 2007, Rebecca Charles of Pearl Oyster Bar in New York sued her form sous chef (Edward McFarland) for copying preparation and presentation. The list goes on and on, with many lawsuits ending in settlements.

You can’t talk about the legalities accurately if you don’t know the lingo, let’s clarify a few of the terms before we get stuck in:

• Intellectual property (IP) refers to anything that is created by the mind, including inventions, written and artistic works, music, designs, symbols and names and images used in commerce.

• Copyright grants the creator of an original work exclusive rights to use and distribute said creation. Copyright is limited in certain ways, including time (e.g. the default copyright length for a published work is the life of the owner plus 50 or 70 years) and through certain exceptions such as fair use (which permits limited use of copyrighted material without having to acquire permission from the right holders, e.g. for news, reporting, research, criticism or parody uses).

• A trademark is a recognized design or unique expression that is associated specifically to a product or a service – it identifies a brand.

It’s useful to note that copyright is automatic but trademarks need to be registered. Both require litigation to be enforced.

Ok, now we’ve brushed up on our legal know-how, can food be copyrighted? Yes. And no. That depends on the definition of “food”. Copyright protection is subject to requirements: 1) originality (a work is not eligible for copyright unless it is original) and 2) material embodiment (the work should exist in a material form before it is eligible – this seems obvious but makes sense in terms of music). There are other more technical requirements, but let’s stick to these two.

Things are looking good for the copyrighting a dish, as long as it’s material and exists. But it only exists until someone eats it. Uh oh. Under U.S. copyright law, there is a clause (specifically of a sculptural work, which is the most relevant interpretation for the type of artistic plating that chefs are looking to protect) requiring the work to be “fixed in a tangible medium of expression”. The word “fixed” here is what causes a headache. Is food a sufficiently permanent or stable medium to fulfill this requirement? The fixation requirement essentially provides the tangible evidence of the copyrighted work – which disappears down the diner’s gullet. Even if a dish was kept, uneaten, in an attempt to uphold this copyright requirement, the food itself is perishable and will eventually decay. The transient nature of a chef’s food is therefore not enough (in the U.S. at least) to satisfy the burden of copyright.

Practically speaking, the best way for a chef to protect his design would be by filing a design patent for the dish. Design patents have been successfully granted not only for plating arrangements but also for specific shapes of food (e.g. pretzel shapes, waffles, pasta etc.). The downside of this (as with many forms of IP) is that acquiring and prosecuting a patent can be a long and expensive process.

The take-away? Theoretically, chefs could probably protect their signature dishes if they really wanted to. But it won’t be easy. They could even bar guests from taking photographs in an attempt to protect their intellectual property, but what establishment in their right mind would sue a diner because they foodstagrammed something?

In the end, if a chef feels that a rival has shamelessly stolen an idea, a design or even an entire dish, it will be cheaper and more effective to put them on trial in the court of public opinion than drag them through a real one.