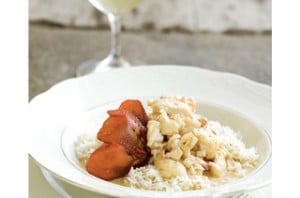 Despite the fact that they are visually challenged, crayfish are our favourite form of edible underwater life. But they come with a health warning (cholesterol heaven) and an insane price-tag.

Hilda-Honda Duckitt, one of our best-loved early food writers, forked out a measly three-and-sixpence each in the good old days. And Lawrence G Green would call today’s crayfish shrimps; in 1936 he wrote of a monster measuring 39 inches (99cm) from tail to antennae tips.

Some lucky fisherman still fill their quota in the open season – provided, of course, that they have a licence and something that floats (like a boat) or can wriggle into a wetsuit, swim underwater and hold their breath at the same time, and aren’t skrikkerig about grabbing the beasties with malice aforethought.

Once the hunter-gathering part is over, the least distressing way to prepare crayfish (for the cook) is to drown them in cold, fresh water (it takes about 30 minutes). If you’re a crayfish, though, you may prefer to be pierced between the eyes with a very thin knife. To boil, calculate the cooking time at six minutes per 450g. Bring a few cupfuls of salted water to the boil in a large pot. Add the crayfish (ignore their squeaks of distress) and start timing when the water is boiling briskly.

Scrub your quarry clean and cut in half lengthwise (tonk the knife purposefully with a mallet if necessary). Pull out the alimentary canal, leaving the mustard coloured liver (tomalley) and coral in place (these are delicacies, I promise!) and serve with lemon wedges, a sauce of your choice – and a sizeable finger-bowl.

If you’ve got a surplus of kreef for your immediate needs (wonderful thought), freeze the tails in freezer bags for up to three months. Cook and munch the bodies immediately, and use the cooking liquid for stock.

This dish dates back to 1876 when it was a signature at Delmonico’s Restaurant in New York. Chef Charles Ranhofer got the recipe from Ben Wenberg, a West Indies sea captain, and Lobster la Wenberg caused a stir among the toffee-nosed after-theatre supper set.

After Wenberg and Delmonico’s proprietor came to fisticuffs, the dish was renamed Lobster la Newberg (a nifty reversal of the first three letters of the captain’s name). Newberg morphed into Newburg which became a standard in hotel dining rooms in the United States and, later, in French cookbooks.

2 T each brandy and medium-dry sherry

¼ t cayenne pepper, plus extra for

METHOD
Remove the crayfish from the shells and de-vein. If you’re feeling flashy, cut off the fanned part of the tail, poach for five minutes in boiling water, then scrub clean. Slice the tails into large cubes.

Heat the butter in a medium frying pan and fry the crayfish over medium heat for a minute or two, turning the pieces as they cook. Remove the pan from the heat, pour in the brandy and sherry, and ignite. When the flames subside, remove the crayfish from the pan and set aside while finishing the sauce.

Still working off the heat, blend the flour into the pan juices, then add the stock or water, cream and juices from the cooked crayfish. Season with salt, pepper and cayenne pepper. Boil the sauce, stirring, until it thickens. Check the flavour and consistency: add a little more water if it’s too thick; simmer briskly if it’s too thin. Return the crayfish to the sauce and heat through.

Serve with rice, garnished with the tail shells and a dusting of cayenne pepper.

WINE PAIRING
Chardonnay – choose a wooded example with enough oomph to make its presence felt next to this rich and creamy dish.

Chardonnay: The chameleon of viticulture

Jay McInerney, the keynote speaker at this year’s Celebration of Chardonnay hosted as always by De Wetshof, is a US writer who made his name with a 1984 novel entitled...