As temperatures drop and immune systems buckle into sore throat season, food that soothes and insulates seems increasingly appealing. At such times, there is nothing nicer than scooping up soft, bubbly cheese with hunks of crisp-crusted bread. It is not just the taste and texture of a cheese fondue that appeals. There is emotional warmth involved too. Very few meals are as communal and conspiratorial as a fondue for two.

And yet I know, that if I confess my fondness for a lingering lunch perched around an enamel fondue pot dunking and gossiping, I will be mercilessly mocked. The post-traumatic stress of 1970s childhoods hangs heavy around this Swiss culinary classic and it is widely despised. The Asterix comic strip in which a villainous Roman foe devised a system of kinky forfeits for dropped bread hasn’t helped with fondue phobia. There are those hipsters who have taken fondue back as an ironic, retro-chic naff as cool gourmet gimmick but that is almost worse than straight scorn. The 70s are long gone. Surely, we can find it in our hearts to rethink and readmit fondue into the socially acceptable food fold? Why is it any different from other cheesy comfort classic? No one mocks those who like macaroni cheese, pizza, tartiflette or Welsh rarebit, so why fondue? 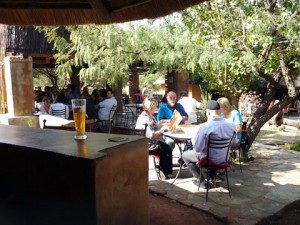 A few weeks ago, I ate a magnificent fondue at African Swiss. This charming restaurant and spa, close to Hartbeespoort Dam, is set against the majestic Magaliesburg mountains. There is a roaring log fire and great citrus-laden glühwein to offset the winter chills. I was nursing a cold so I reverted to water after my glühwein but there is a decent, predominantly South African wine list with reasonable-low mark ups for those who are not suffering from the dreaded snot disease. The phrase “easy drinking” tends to have negative connotations but I mean no disrespect when I say that at African Swiss the wine list offers easy drinking, broad spectrum whites and reds most of which will be pleasant with almost anything on the menu.

The fondue was served in a traditional table burner (set over a low, low heat) with long forks and a bowl of house-made bread cut into cubes. Emmental cheese provided a blissfully nutty, oozy base. There was a subtle hint of garlic and the simple abundance of dry white wine and a slosh of Kirsch. The cheese was so perfectly molten that it wrapped itself around the bread like the hug of edible love it should be. Best of all, once we had eaten all that unctuous cheesy magnificence, we were rewarded with the crust (la religieuse) at the bottom of the pot. Needless to say it was greedily fought over.

Even if you can’t get over your 70s fondue association it is worth remembering that the fashion for fondue in the English speaking world came about as a result of a series of rolling power cuts in the United Kingdom in the immediate pre-Thatcher era. This electricity shortage occurred in the latter months of 1978 and lasted into early 1979. It was described in the popular press as the Winter of Discontent. Suddenly, all those pots of boeuf en daube and trays of leaden vol au vents in the electric oven were not possible. Essentially, melting cheese over flame became the stylish solution to load shedding. Sound familiar?