Restaurant review: As Greek As It Gets

Stavros Vladislavic is a Tshwane culinary Colossus. Having previously owned several landmark Greek restaurants in the city he broke many hearts when he decamped a decade ago to neighboring Cullinan. Now he is back and the people of Pretoria are as pleased as Punch. 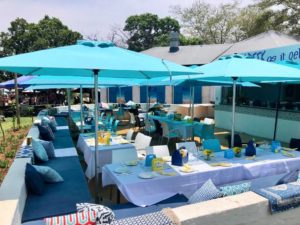 And so, they should be. In a world where brand originators increasingly create replicable eatery concepts (rather than real restaurants) Stavros Vladislavic is a proper, old fashioned chef-patron. His personality is infused into every aspect of his new Menlo Park establishment. The venue’s moniker refers to both the chef and his food. Ignore the Slavic sounding surname – it’s a long story involving Pretoria West, smuggled diamonds, a span of mules and a 1940s Yugoslavian smous who saved the day – the restaurant’s name recognizes that while the ancestry of the chef and all the dishes on the menu are Greek, the Gauteng terroir in which both he and his ingredients were raised is not Greece. Oregano and lemons grown in this soil and under a South African sun taste different. Not better or worse just different. The same is true of boys who grow up speaking Greek and Afrikaans interchangeably. In this context the chef and the restaurant are as Greek as it gets.

Décor says whitewashed-Santorini-soothing but the ambiance is ebullient. And loud. There is no such thing as a quiet evening at As Greek as it Gets. Stavros Vladislavic is a big man in a relatively small space. His booming voice and boisterous manner are everywhere apparent. Pause for a moment over the menu and he will tell you what to order. Smashing of plates and audible kitchen quarrels are deliciously de rigueur. His legions of fans (myself included) would have it no other way.

The food has a wonderful immediacy of flavour that keeps customers eating long after hunger is satiated. The basket of crisp based, olive oil brushed triangular wedges of freshly made pita bread was where all of our low-carb aspirations died. Accompanied by melitzana aubergine we dipped and dipped again. And again. Dolmades were small, sweet, nutty one-bite wonders. Saganaki topped with sour cherries were followed by fat, feta-stuffed chicken bourekia which redefined all notions of finger licking good. The doyenne of Middle Eastern cuisine, Claudia Roden, argues that “since baklava is very rich and sweet, portions should be very small” but she hasn’t had Stavros Vladislavic’s exquisite orange, clove and honey syrup drenched filo and walnut twirls of splendor.

The American food critic Jeffrey Steingarten once wrote that “any nation that adds pine pitch to their wine should not be trusted with a saucepan let alone a wineglass”. As with so many things Steingarten is witty but wrong. The food is fantastic and the wine list has been carefully assembled with the menu in mind. Local listings are extensive and generally well-priced with an emphasis on new producers over iconic estates. As befits the celebratory style of the restaurant, Champagnes, Proseccos and Cap Classiques are plentiful. There is no retsina but several ouzo and tsipouro options.

By now you should have got the message: As Greek as it Gets has great food, a good wine list and a charmingly iconic chef. Its ebullient, good hearted ambiance leaves a diner feeling that all is well with the world. And we all need that.

As Greek as it Gets: Greenlyn Village, corner Thomas Edison and 13th street, Menlo Park, Pretoria; 084 455 5588; asgreekasitgetspretoria.co.za: Monday to Saturday 11am to 10pm; Sunday 10am to 5pm

Anna Trapido As Greek As It Gets